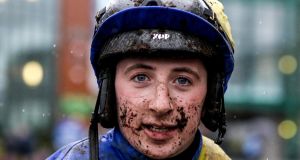 An already memorable 2020 could get even more significant for trainer Eric McNamara in Wednesday’s Guinness Kerry National at Listowel.

On Wednesday Co Limerick-based McNamara will leg up his younger son, Conor, on board Internal Transfer for the Listowel festival’s €150,000 highlight.

The Kerry National has proved notably successful for McNamara in the past with Ponmeoath winning back-to-back in 2007-08 and Faltering Fullback beating his stable companion Questions Answered in 2012.

For a long time in last year’s race Internal Transfer looked like he might add to that record, leading for much of the last circuit before fading to fourth in the straight.

The nine-year-old is back for another crack at it, starting off the same handicap mark and with his talented rider’s 5lb claim to help.

“If we could win it this year I think it would probably give me the most satisfaction of all,” McNamara Snr admitted. “Conor will be riding him and we’ve hopeful of a very big run.”

Normally a crowd of over 25,000 could be expected to throng into Listowel for the National, which this year will instead be run in front of a maximum of 200 owners.

Horses carrying the silks of high-profile owners such as JP McManus, Michael O’Leary and Mrs John Magnier figure among the 18 declarations.

They include last year’s runner-up Ravenhill who races off a mark over a stone higher due to a Cheltenham festival victory since then.

Rachael Blackmore was successful on Poker Party in 2019 and this time is on Spyglass Hill for Henry de Bromhead who has two other hopes in Plan Of Attack and Kupatana.

Paul Townend has opted for the Galway Plate third Cabaret Queen from a Willie Mullins-trained trio.

Local jockey Kevin Brouder will hope to secure the biggest win of his career on board Doctor Duffy before beginning an eight-week ban on Friday for breaching health screening protocol at Galway earlier this month.

Doctor Duffy has topped betting lists on the run-in to the big race which is due off at 4.30 and will be shown live on TG4.

However there could be each-way value in Internal Transfer, who warmed up for this with a run over hurdles and may benefit from a patient ride on this occasion.

The McNamara team has already been on the mark here this week with Blackjack Boy winning on Monday.

Earlier on Wednesday’s programme Gordon Elliott will give the expensive purchase Malone Road another spin over flights in a five-runner novice hurdle.

Cheveley Park Stud’s 325,000 Guineas purchase returned after 642 days on the sidelines due to a couple of knee injuries and won at Kilbeggan last month.

Elliott described the horse as being “half-sleepy” during that race and Malone Road should strip a lot sharper on this occasion.

Malone Road is already as low as 12-1 in some ante-post lists for the Cheltenham festival’s Supreme Novices’ Hurdle in March.