Cheltenham quiet on measures to combat drones at festival 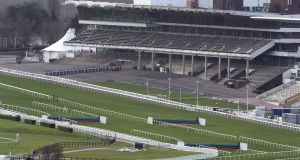 Cheltenham officials have declined to speculate on reports plans have been put in place to enlist the help of a specialist company to combat the threat of drones at next month’s festival.

Reports on Thursday named a firm understood to have been recruited by Jockey Club Racecourses to help mitigate against the practice – prevalent this winter at British tracks – of flying drones over venues during race days.

Drones have been spotted at several tracks around the country, reportedly in order to send live footage of races to in-running gamblers seeking an edge several seconds ahead of broadcast coverage.

Extra aerial traffic is an obvious potential safety and security concern at high-profile meetings such as the spring festivals at Cheltenham and Aintree – another Jockey Club track.

A spokesperson for Cheltenham referenced that consideration, while pointing out course policy to offer no further comment on the issue.

A brief statement read: “We don’t disclose the details of our security plans as part of ensuring we deliver safe and enjoyable events.”

An existing exclusion zone is to be extended up to three miles as of March 13th.That measure will apply to Cheltenham too, because the course is licensed for helicopter arrivals and departures for owners, trainers and jockeys.