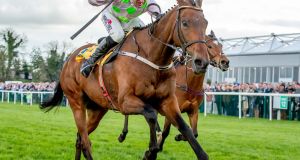 Chacun Pour Soi will have just his third ever start in the €125,000 Grade One Paddy’s Reward Club Chase on day two of the Christmas festival at Leopardstown. Photograph: Morgan Treacy/Inpho

Willie Mullins has confirmed he plans to serve up perhaps racing’s most eagerly anticipated Christmas dish by running Chacun Pour Soi at Leopardstown.

The hugely exciting seven-year-old will have just his third ever start for the champion trainer in the €125,000 Grade One Paddy’s Reward Club Chase on day two of the Christmas festival.

Last March, and over a thousand days after first arriving from France, Chacun Pour Soi made an immediate impression with a 31-length Beginners Chase win at Naas.

That was very much an aperitif however for Punchestown in May as he secured Grade One glory in brilliant style by routing a pair of Cheltenham festival winners in Defi Du Seuil and Duc Des Genievres.

It immediately prompted speculation that Chacun Pour Soi could be the one to finally fill the one glaring gap remaining on Mullins’s CV, the Queen Mother Champion Chase at Cheltenham in March.

With a decision on the direction of the campaign for the reigning two-mile champion, Altior, still awaited, Chacun Pour Soi is a general 7-2 shot for ultimate championship glory.

That’s ahead of Defi Du Seuil who landed Saturday’s Tingle Creek at Sandown, a result which prompted the Irish horse’s official mark to be raised 2lbs to 169.

Very much still an unknown quantity, an appearance by the Rich Ricci-owned star will for many be the most fascinating element to a packed Christmas schedule.

“We brought him to Punchestown on Sunday for a piece of work and I was very happy with how he went. He missed a bit of time before that but I hope to have him straight for Leopardstown,” Mullins said on Tuesday.

Having finally broken his Gold Cup hoodoo with Al Boum Photo last season – after half a dozen runner-up finishes – Mullins also looks to have another prime Champion Chase contender on his hands in Cilaos Emery.

That horse maintained a perfect three from three record over fences on Sunday when comprehensively beating the 169-rated Ballyoisin in Cork’s Hilly Way Chase.

Cilaos Emery too holds an entry in the Leopardstown race but the trainer hasn’t decided on a next start for him.

Mullins has a chequered history in the Leopardstown highlight, winning with the 1-8 Douvan in 2016 but also enduring a series of near-misses.

Un De Sceaux fell when clear at the second last as a 1-4 shot in 2015 while Min at 2-7 was disqualified by the stewards in 2017 in favour of the English raider Simply Ned.

That veteran upset another Mullins favourite in Footpad last year and is in line for a hat-trick attempt in just over a fortnight’s time.

In the shorter-term, it is Mullins’s great rival Gordon Elliott who looks to dominate the outlook for this Sunday’s Grade Two feature at Navan.

Elliott has six of the nine entries left in the Navan Novice Hurdle including the JP McManus-owned Andy Dufresne who won on his hurdling debut over the course and distance last month.

Mullins’s sole entry for a race he has won five times in the last eight years is another McManus owned novice, Elixir D’ainay.