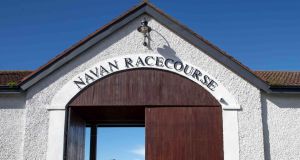 Racing photographer Pat Healy was taken to hospital following a nasty incident after the line in the opening race at Navan.

Thatsy and Entoucas fought out a thrilling finish to the www.navanracecourse.ie Maiden Hurdle, with the pair coming close together on the run to the line after negotiating the final hurdle.

While Thatsy just edged in front to win, Entoucas appeared to crash through the inside railing just after the post – colliding with the photographer, who was stationed nearby.

He was quickly tended to by medical staff – and while he was reported to be conscious, he was taken to Blanchardstown Hospital by ambulance for further examination, causing a delay to the following ‘Monksfield’ Novice Hurdle.

The doctor on duty at the track, Frank Kenny, said: “He left the course very stable and has injuries to the right side of his chest.”

Entoucas and rider Mark Walsh escaped serious injury, with the jockey reporting his mount had dived at the gap in the railing just after the line.

Dan Tuohy explains ‘rotten to the core’ comments 18:08
Serie A matches to be played behind closed doors due to coronavirus 17:54
Sam Bennett sprints to second in stage two of the UAE Tour 15:55
Northern Irish FA ban children aged 12 and under from heading footballs 15:18
Panorama show Mo Farah changed account to anti-doping investigators 14:41
Here is your handy guide to sport on television this week