Altior makes it a record 19th straight win at Sandown 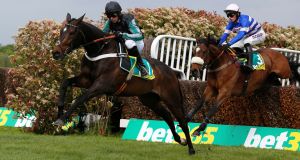 Altior took his unbeaten run over fences to a record 19 in a row as he led all the way to win the bet365 Celebration Chase for the third successive year at Sandown.

Nicky Henderson’s superstar threw down the gauntlet to the opposition from the off as he jumped from fence to fence, and whenever another horse got within touching distance, he pulled out more without being overly extended.

Sceau Royal tried to mount a challenge and did look dangerous at one stage, but he was ultimately brushed aside as the 1-6 favourite passed the post two and a half lengths to the good in the hands of Nico de Boinville.

The nine-year-old had joined mighty staying hurdler Big Buck’s on 18 wins when landing the Queen Mother Champion Chase for a second time at Cheltenham last month.

Henderson is now looking forward to stepping Altior up in trip next season.

He said: “He told us one thing today – go further, so that is what we will do. There is not much point doing it for the Ryanair, so you have got to go King George.

“How we set it up, I’m not quite sure, but we’ve got a long summer to think about that. Nico said he had to keep the revs up the whole way there. He was firing along and going a good old rattle.

“His jumping keeps him going like that. He just keeps galloping.

“Nico said he is not quite as quick as he was, but I think that has been coming for the last year, so that’s fine – now is the time to do what you all have been telling me to do for two years!

“We are incredibly lucky, touch wood, he has been an easy horse to train. Although we have had that one wind operation, apart from that he has been a very sound horse, so let’s hope he can stay that way.

“If you have sound horses and you can train them properly, it makes life an awful lot more easy, as you know you are going in there in good shape every time.

“He is a very easy horse to read, he wasn’t ready before Aintree and he told us he hadn’t got over Cheltenham.

“It is great when you have horses that virtually talk to you. I would have loved to have gone to Aintree for the two-and-a-half race [JLT Chase], but he just wasn’t ready to come back for that.

“He is a great athlete. I was walking the course this morning with Nico and we walked passed the ditch in front of the stands and we said we know what he will do here. Every year he has met that ditch and gone ‘whoosh’.

“He is a champion and he has to be, as he has done what he has done, but as people say – you are not something until you have done something quite extraordinary.”

De Boinville said: “It’s great to get the record, it’s fantastic. He didn’t travel as sweetly as I’d like him, but we will go up in trip next season and go from there. It looks like he wants it. He wants every yard of two and a half to three miles.

“I’d love to take on the likes of Cyrname and different horses like that. He is always just holding on to a bit. I just had to keep him up to his game and interested.”

Alan King said of Sceau Royal: “I thought Altior making the running would make him more lethal. He ran really well, but not at any stage did I think he was going to beat him.

“He was travelling all right, but Altior was just dossing in front.

“He is a grand horse, but we have been beaten by a champion. If one of the good novices come through he is always going to be vulnerable, but he has run great.”