296,200 Virgin subscribers won’t have access after Eir removed its channels from platform 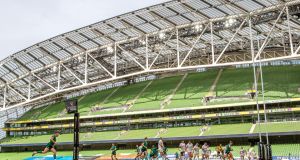 Rugby’s return to Irish television screens has been substantially blocked by the escalation of a financial dispute between Eir Sport and Virgin Media.

The 296,200 household subscribers to Virgin Media will not be able to watch live coverage of Ulster against Leinster on Saturday (kick-off 7.35pm) or Munster against Connacht on Sunday (3pm), both at the Aviva Stadium, due to a decision by Eir Sport last Tuesday to remove its channels from their rival’s platform.

TG4 are providing deferred coverage of both games. The same applies to the Pro 14 semi-finals next week, although TG4 do have the rights to broadcast the final live on September 12th.

“Eir sport can only pay for the sports events that actually take place,” stated the company, owned by French billionaire Xavier Niel, on August 13th. “We have consistently offered fair terms to each of our live sports content providers to reflect the reduced timetable, however Virgin Media has not agreed to updated terms and has taken the unreasonable step of unilaterally withholding their feed from Virgin Media Sports viewers on the Eir network.

“We are working towards a swift resolution to this issue.”

However, this week, they stated: “Eir Sport has today taken the difficult decision to remove its sport content from Virgin Media’s platforms, two weeks after Virgin Media suddenly and unilaterally withdrew the Virgin Media Sports feed from Eir and its customers.”

With a swift resolution not expected before this weekend, many rugby supporters will be forced to leave the safety of their own homes to watch the games in pubs or restaurants, which comes with the increased risk of contracting Covid-19.

The Irish Times reported earlier this month that Eir informed Virgin Media it was willing to pay 40 per cent of the owed payment, following an agreement in August 2019 for live sports to be carried on each other’s television platforms.

The contract with Eir is believed to contain no force majeure clause in relation to events that do not take place, wrote Laura Slattery on August 14th, after Virgin Media pulled its sports channels until Eir “pays its bills.” That decision came into effect 90 minutes before the Champions League quarter-final between Atlético Madrid and Leipzig.

Industry insiders believe the disintegration of relations between the broadcasters could not come at a worse time for the Guinness Pro 14 brand. The former Celtic League confirmed earlier this week that neither South African team - the financially unstable Southern Kings or the Cheetahs - would travel to Europe at least until January 2021.

Despite next season being scheduled to start on October 2nd, the fixture list has yet to be released. How it can still be called the Pro14 when two teams will have a three month backlog of games remains to be seen.

More importantly, Eir is two years into a three-year broadcasting deal with the Pro14, who are expected to put their television rights out to tender next month.

The current impasse can only influence how this process will develop.

Last Tuesday Eir stated they were “entitled to immediately suspend the Eir Sport 1 feed due to Virgin Media’s fundamental contract breaches” despite being “deeply aware of the importance of live sport to viewers, in particular at these difficult times.

“We therefore gave Virgin Media seven days’ notice, in the hope that they would make reasonable efforts to engage and prevent customers being deprived of live sport, including the Pro14 games last weekend.

“Renegotiation on rights fees have been commonplace over the past few months globally as broadcasters and content owners come to fair and reasonable resolutions around the absence of live sport and the curtailed seasons now in place, however Virgin Media has refused to engage on a constructive solution.”

In response, Virgin were “very disappointed with Eir’s decision” but added that their “door has always been, and will continue to remain open to Eir on this matter.”

1 Robbie Henshaw likely to be the only Irish change for France finale
2 Seán O’Brien: Anger over my parents’ break-up never left me
3 Cian Healy: ‘Realistically I got away with murder when I was younger’
4 Bartomeu resigns and drops bombshell of Barcelona joining European Super League
5 Liverpool maintain perfect start but count cost with Fabinho injury
Real news has value SUBSCRIBE
Here is your handy guide to sport on television this week