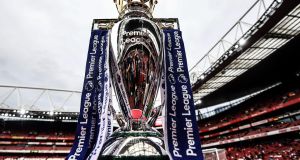 The Premier League is set to restart on June 17th. Photograph: Andy Rain/EPA

The Premier League is set to return - behind closed doors - on Wednesday June 17th, it was announced yesterday. Aston Villa will play Sheffield United and Arsenal will face Manchester City, meaning all 20 teams have played 29 matches, before a full round of fixtures follow on the weekend starting June 19th. All 92 remaining fixtures are set to be shown live across the league’s broadcast partners - Sky Sports, BT Sports, BBC and Amazon Prime. The BBC will show four matches free-to-air for the first time since the Premier League’s inception in 1992. Premier League chief executive Richard Masters said: “This date cannot be confirmed until we have met all the safety requirements needed, as the health and welfare of all participants and supporters is our priority.”

Yesterday saw some of the finest hands, feet and minds in Irish sport come together for the second part of the IRFU’s Analytica Zoom conference, in aid of Pieta House. And one of the highlights was Ireland boss Andy Farrell’s discussion with Paul O’Connell and Dundalk manager Vinny Perth. Farrell, whose Ireland side had won two and lost one of their three Six Nations fixtures before the Championship was postponed due to the coronavirus crisis, looked to emphasise the importance of a Monday morning debrief. He said: “So on Monday you’re not just trying to review, you’re trying to make people feel better for a good start to the week and also to influence the plan for how you’re trying to push forward for the rest of the week.”