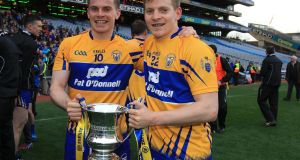 About five minutes from the end of last Sunday’s league semi-final win over Kilkenny, Podge Collins chased down an overhit pass to dispossess Lester Ryan on the Clare 45. The ball ran loose and Collins was the quickest onto it, picking it on the half-turn, spinning like an NFL running back to throw TJ Reid for a loop.

He finished by making Richie Hogan bite on a tackle so he could play a handpass off his stick to a line of three Clare runners on his outside. The whole sequence took about 4½ seconds but you could have slowed it down and played Ravel behind it without blushing.

Remember when Zinedine Zidane used do that two-step pirouette move, double-dragbacking some hapless defender into wondering would he have been better off paying attention in school?

This was a bit like that. Zidane could be showboaty when he wanted to be – he chipped a penalty in off the underside of the crossbar five minutes into a World Cup final, the lunatic – but most of the time, those little moves and tricks were just the most efficient way of moving the ball past the player he wanted to beat.

Same with Collins. He could have taken a shoulder off Reid after he picked the ball – and the way the Kilkenny marksman shaped, that was what he had in mind. But Collins skipped on by, like a half-interested lunch companion who’s already moved on to another conversation in his head. Hogan was similarly goosed – by the time he set his feet to meet Collins, he was already living in the past.

That, in summary, is the joy of having Podge Collins back hurling for Clare.

Davy Fitzgerald has bigger players, he has better players, he has, frankly, more important players. But he doesn’t have another like Collins, who shuffles around the pitch solving problems as he finds them. Columbo in a blue helmet.

Which is why the worst part of Clare’s afternoon last week looked like coming just after he laid off the handpass to Colm Galvin. No sooner had the ball gone but Collins pulled up lame. For an awful moment, it looked like his hamstring had gone. In that split-second, the rank unfairness of sport seemed like it was going to have its say again.

Thankfully, it was just cramp and Clare were able to get Bobby Duggan on before Collins did something more serious to himself.

We know, though, what the general tenor of the fallout would have been, don’t we? This was Collins’s first full chunk of hurling for Clare since his return from the cruciate injury that kept him out for 2015, but he had put in a couple of meaty enough substitute appearances for the footballers as their league came to its apex.

The last round of games in Division Three against Kildare clashed with the hurlers’ quarter-final against Tipperary and Collins spent his afternoon in Newbridge rather than Ennis that day. You can be sure that would have got an airing if he’d turned out to have done himself damage last week.

When Aidan Walsh tried it for Cork a couple of seasons back, his sheer athleticism was always going to buy him a bit of breathing space. Whereas to look at Collins, you wouldn’t back him to hold his own in either code, never mind both of them.

And yeah, it will be no surprise if it all goes wrong somewhere along the way. The barrage of fitness information we have these days tells us that teams are all about training blocks and peaking and tapering and all that jazz. That’s tough enough for amateurs playing one sport for one team but it obviously gets complicated when you double up, all the more so when you’re coming back from long-term injury.

On Saturday night, he got to climb the steps of the Hogan Stand and watch Gary Brennan lift the Division Three title. He got to do it along with his father Colm and brother Seán, who watched him work his way back from an injury that, though not as devastating as it once was, still takes months of desolate, deadening work to recover from.

And now, this coming Sunday, he gets to take a swing at adding a hurling league title to go alongside it. How often in those months of recovery did he think such a double was even possible? It would have taken serious imagination, albeit we know he isn’t exactly lacking in that department.

No, Podge Collins probably shouldn’t be doing this. But life is life and everyone’s is their own. The bonus for the rest of us is in getting to see him try.