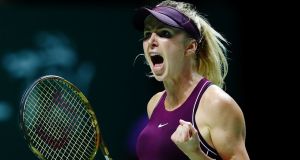 Ukraine’s Elina Svitolina has this year hired a mental coach to help her this season. Photograph: Clive Brunskill/Getty Images

In regular times, the first days of the tennis season are moments of unfiltered satisfaction as players embrace their colleagues again and arrive refreshed for the year ahead. But for Ons Jabeur in Abu Dhabi this week, her joy is accompanied with a hint of resignation.

“I’m hoping that this bubble life will end very soon,” she said. “Even though I’m not sure when the Covid’s going to be over. But, I mean, we want our freedom. We are professionals and I think we can have the responsibility to be in the tournament and also be responsible at the same time. We don’t need those restrictions. But what can you do? You have to accept them after all.”

As the 2021 tennis season marks its arrival this week, acceptance for professional tennis players means travelling to the Abu Dhabi WTA 500 event or the opening ATP 250 events in Antalya, Turkey and Delray Beach in Florida. After Australian Open qualifying concludes next week, more than 300 players and some team members will fly to Australia in up to 18 chartered flights. They will desperately hope that their flight around the world is not ruined by a positive coronavirus test when they arrive.

The reality is that last year’s difficult season was likely only a prelude to the many months of players travelling between hotel bubbles around the world. The arrangement produced divergent results in 2020 as some adapted and others struggled. The world number five, Elina Svitolina, failed to reach her top level as she watched the strong pre-pandemic form of her boyfriend, Gaël Monfils, crumble. This year she has hired a mental coach to help her along the way.

“During the difficult time right now, I think mentally it’s very important to stay strong, to stay fresh,” Svitolina says. “You have a different kind of pressure and also playing without people, without fans, it’s a different feeling. So after playing a few tournaments at the end of the last season, I was thinking to take the mental coach and I think this is the right decision for me right now.”

Abu Dhabi stands as a reflection of the tour’s pandemic difficulties. Its total prize money is, like most ATP and WTA events, significantly lower than similar tournaments last year. However, the entire pot is provided by the WTA rather than sponsors, a reflection of both the difficulty of erecting a completely new tournament with just four weeks notice in the middle of a pandemic. It also underlines the struggles of even the most successful women’s sport during these times.

With Australia looming on the horizon, it remains to be seen whether all will adhere to the strict rules. Few sports have come across as badly as tennis during the pandemic, with numerous players having failed to grasp its significance, especially within the men’s game.

Most recently, Sam Querrey was handed a lenient suspended $20,000 (€16,000) fine by the ATP after fleeing Russia by private jet with his wife and seven-month-old child following their positive coronavirus tests. In an interview with Sports Illustrated on Monday, Querrey revealed the European city that offered lax enough airport controls for him to cross the border while infected: London.

Still, for most players this is just another opportunity to play tennis, even in conditions that are not ideal. The former number one Karolina Pliskova identified her simple goal for 2021 as to not complain about the rules, conditions and all that could upset her along the way.

“For me it’s still better than to be home. My family is healthy, I can travel and I can still do what I love. I think there is no room for complaining.” Then she laughed to herself: “No matter how my results go.” – Guardian