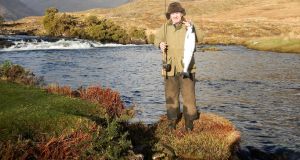 Mr Pat Hagan from Co Dublin with the first salmon of the season at Delphi Lodge, Connemara.

“WE ARE now seeing the benefits of state investment with millions of euro and expertise from state agency personnel [now available] to develop angling throughout the country,” according to Salmon and Sea Trout Recreational Anglers’ Ireland (SSTRAI) chairman Mr Paddy Sullivan.

The level of financial and personnel support SSTRAI has received from state agencies has improved immensely in recent times and assistance from the Angling Council of Ireland (ACI) has been pivotal to success.

“I would also like to thank Irish Water for engaging with our affiliated clubs and providing leases and permissions for development projects. ACI has provided us with administrative support, Garda vetting, training and financial support. This has helped to advance angling as an adventure sport and outdoor activity that can be enjoyed by all,” Sullivan said.

Founded in 2003, SSTRAI is a national not-for-profit recreational angling organisation with affiliated clubs throughout the country whose primary concern is for the protection and conservation of wild Atlantic salmon and sea-trout.

The Fish Farming Working Group has confirmed that Inland Fisheries Ireland (Ifi) is to continue to produce fish for availability to angling clubs throughout 2018 and into the future. The group is comprised of IFI board members and representatives from the Trout Angling Federation of Ireland and National Anglers’ Representative Association.

Following confirmation of securing the required investment, tendering for design of a new fish farming facility has also begun. In this context, the group is committed to developing a comprehensive strategy to meet current and future trout production needs.

The group also discussed advancement of the angling sector including the wider growth of youth angling and the potential for developing urban angling locations.

Minister Kyne said: “I look forward to hearing more, and being part of, similar productive dialogue over the coming months and years.”

Delphi Lodge in Connemara got off to a fantastic start to the fishing season with a fresh run salmon caught to the fly on the first day. Experienced salmon angler Pat Hagan from north Co Dublin landed a 3.4kg (7lb 9oz) fish in the Waterfall Pool.

The Minister for Marine, Michael Creed has announced that following proposals by the National Inshore Fisheries Forum, he has commenced two public consultations to increase the size of razor clams and brown crab.

If implemented, the minimum size of razor clam in the North Irish Sea would increase to 125mm from the current size of 100mm. The proposal for brown crab would increase to a minimum of 140mm instead of the existing 130mm.

Interested parties are invited to view and complete the consultations on fishingnet.ie/sea-fisheriesconsultations and submissions may be made via post, E-mail or online through the link provided.

The club is official

The good attendance unanimously adopted the club constitution and a committee was elected for the coming year. Plans and ideas as to the way forward were forthcoming from the meeting and the stocking of 600 juvenile fish by Inland Fisheries Ireland was warmly welcomed.

Membership is set at €15 and printed T-shirts are also available at €15. For further details, contact Duncan at 087-986 2686 or duncansmithfingal@gmail.com.