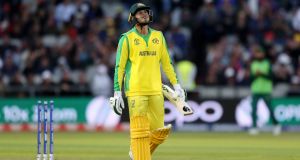 Usman Khawaja will miss the Cricket World Cup semi-final with England due to a hamstring injury. Photograph: David Davies/PA

Usman Khawaja has been ruled out of the rest of the World Cup with the hamstring strain he suffered during Australia’s loss to South Africa, the head coach Justin Langer has confirmed.

Matthew Wade has been named as cover for the batsman but Australia will need the approval of the ICC’s technical committee for confirmation. Khawaja’s injury comes just days after fellow batsman Shaun Marsh suffered a broken arm in the nets. His place in the squad was taken by Pete Handscomb.

“Ussie’s got a hamstring strain so he’ll be out for probably three to four weeks which is a real shame but we have to work hard on getting him up for the Ashes now,” Langer said. “Such a pity for him, he’s been so integral to how we’ve been playing. Like Shaun I feel sad for him that he’s going to miss the World Cup semi-final.”

Wade will be joined by Mitch Marsh, also called up from the Australia A touring party, who will act as cover for Marcus Stoinis. The all rounder is feeling pain in his right side just weeks after he missed two games with a left side strain.

“Marcus is the same, got another strain in his other side actually so we are working through that at the moment and we’ll have to make a decision on him in the next 24 to 48 hours,” Langer said.

Wade has a modest record after 94 one-day internationals, averaging 25.75 in 80 innings with 10 fifties and only one century, but he has scored recent hundreds against Northamptonshire and Derbyshire.

“Not in the final XI yet but Matthew Wade is coming up,” added Langer. “He’s in great form, he’s had a great 12 or so months back home but he’s also just scored two hundreds in one-day cricket so he’s in great nick. And Mitch Marsh is going to come on standby for Stoinis to see how he comes up.

“Of course it’s frustrating but it’s also the business we’re in, it’s sport and all the teams have had injuries. You never like to have injuries at any time, let alone at the business end but it’s okay, we’ll deal with it.”

Marsh and Wade will join the group in Birmingham, with the team to meet on Sunday afternoon before the Edgbaston clash. It will likely result in Steve Smith moving up to No 3, with Wade playing at No 4 or No 5.

A different option could be to move the wicketkeeper Alex Carey up the order. His 89 on Saturday took him to 329 runs for the competition – a record for anyone batting at No 7 or below.

Finch’s side slipped to a 10-run defeat to already-eliminated South Africa in their final round-robin fixture at Old Trafford on Saturday, a result that saw them knocked off top spot in the table.

It means they now face the host nation in the semi-finals, while India will take on a New Zealand side that has stumbled into the knockout stages with some indifferent performances.

There is no doubt that Australia would have preferred a semi-final against New Zealand, leaving title rivals England and India to battle it out for a final spot, but they must now take on the hosts at one of their favourite venues.

“It’s going to be a blockbuster, it doesn’t get much bigger than Australia-England in a World Cup semi-final,” Finch said.

“Edgbaston is a beautiful ground to play at and the fans are always entertaining down there. It’s going to be a great atmosphere.”