Roger Federer reaches fourth round for 17th time in 19 years 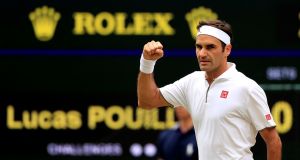 Roger Federer’s dominance at Wimbledon continued as he reached the fourth round for the 17th time in 19 years.

In doing so he became the first player ever — either male or female — to post 350 grand slam singles wins.

He will now meet Matteo Berrettini on Monday as the tantalising prospect of a semi-final with Rafael Nadal looks increasingly likely.

Federer followed the Spaniard on to court following his demolition of Jo-Wilfried Tsonga and enjoyed a similarly comfortable outing once he got through the first set.

The 37-year-old had to fend off two break points, the second at 5-5, and once he had done that there was nothing so sure as him taking Pouille’s serve in the next game to steal the first set 7-5.

Things continued to go south for the Frenchman as Federer sniffed blood and surged into a 4-0 lead in the second set, eventually taking it 6-2.

Pouille regained his spirit and put up a fight in the third, fending off a match point at 6-5 to send it to a tie-break.

But the eight-time champion is ruthless in the breakers and was too good, sealing victory when his opponent sent a forehand into the net.

Earlier Rafael Nadal was in masterful form as he destroyed Jo-Wilfried Tsonga to make the second week of Wimbledon.

The Spaniard has not won the title at SW19 since 2010 but is looking every inch the title contender after an imperious 6-2 6-3 6-2 win over the Frenchman on Centre Court.

After the needle that made his second-round match with Nick Kyrgios unmissable, this was a much more cordial affair against Tsonga, whose career is on the slide.

He now meets either Dan Evans or Joao Sousa and remains on course for a blockbusting semi-final with Roger Federer.

After the intensity of that win over Kyrgios, Nadal will be grateful for the trouble-free nature of this triumph, which was never in doubt as soon as he took his first break to lead 3-1.

The first set was sealed with a second break, to take it 6-2 in 34 minutes.

Tsonga is fifth on list of players with the most wins over Nadal, but he was never going to add to that, and the 33-year-old’s solitary break in the second set allowed him to take it 6-3.

Nadal was in the zone and back-to-back breaks in the third made it the easiest of afternoons as he wrapped it up in one hour and 48 minutes.

3 World Cup 2030 Q&A: Everything you need to know about Irish/UK bid