Wimbledon: Roger Federer looking fit and strong as ever 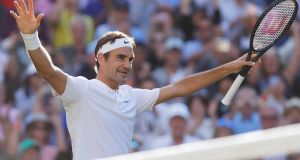 With the departure of Andy Murray and Novak Djokovic, Friday’s Wimbledon semi-finals can be framed in a different context to those that have gone before.

Roger Federer, given his unusual clarity about what he needed to do to preserve his body, arrived in a condition which was in stark contrast to the two younger men, who came into Wimbledon hoping the injuries that had been with them on and off for months could be tempered and controlled with medication and TLC.

On finding out that they could not bear up to the demands of a Grand Slam quarter-final, both players were forced to reflect on whether they would need to take a longer-term view.

Federer did just that and this year missed the clay court season after playing in an incredible 65 straight Grand Slams up to last summer in Paris.

“My back is funny. My knee is swollen. What are we doing,” he asked his coach.

Backing out of the second Slam of the season, the most physically demanding of them with five-hour matches, was a straight sacrifice and a strategic risk-reward decision.

His semi-final match against Tomas Berdych will tell us whether the strategy has really worked with Federer sanguine and even more serene than usual.

He is the one player remaining that prevents the last four standing becoming a thunderous shoot-out of short rallies. Had Federer lost to Milos Raonic, one colleague here noted, the semis would have been a tennis Armageddon. Colourfully overstated but his point was well made. Federer, who knows how to deliver an ace too, has all round game.

“I had a different mindset going in,” he said after beating Raonic.

“I don’t know if it was tactics and feel as well. Then returning second serve I just felt that I could somewhat get a read on his serve. Today it was like that. Probably the next match, it’s just going to be whistling past me.”

How right he is.

Sam Querrey, the first male American in a Wimbledon semi-final since Andy Rodrick in 2009, and his opponent Marin Cilic will lean heavily on their deliveries, first and second in a homogeneous type exchange that will almost certainly build towards a series of tiebreaks.

No matter and these mammoth struggles to outdraw each other in a series of sonic blasts from 20 paces have their own compelling allure. Querrey is also playing for his country.

“Yeah I mean American tennis isn’t that bad. I know it kind of gets a bad rep. That’s just because guys don’t win majors. Hopefully American tennis can get a little boost from this.”

There are relatively new faces at this stage of the tournament. But the old master sometimes seems to be one step ahead.