Annalise Murphy: Seven-boat fleet has split in two as we take our chances 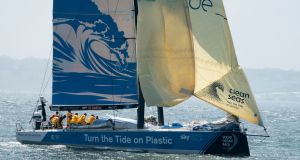 Turn the Tide on Plastic at the start of the Newport to Cardiff leg of the Volvo Ocean Race on May 20th. Photograph: Don Emmert/AFP/Getty Images

So, we’ve rolled the dice once again! We’re into the closing stages of the Volvo Ocean Race, and the last ocean leg as we have left Newport, Rhode Island, heading for Cardiff on the Irish Sea – almost but not quite home.

We’re only a couple of days into this ninth leg, and already the seven-boat fleet has split into two as we take our chances sailing either side of a weather front.

We had a good start to the leg with Turn the Tide on Plastic, but we slipped up at a mark rounding and had to take a penalty turn which put us at the back of the bunch. That meant the boats ahead caught the weather front and steamed away while we were caught in light winds and thick fog.

But we’re in good company, and we can see Charles Caudrelier’s Dongfeng just a mile away, and we think about 20 miles behind us is Xabi Fernandez’s Mapfre. As these two are duking it out for the overall race win, we must be doing something right by taking the more northerly, more direct, route towards Ireland.

Plus they had been about 60 miles ahead of us when we made our call to head north, so we’re pleased with the move.

The other four boats are sailing quicker, but we suspect they have taken a longer route. It will all become clearer when we converge on the ice exclusion off Newfoundland in a few days’ time.

And it’s about to get very wet as there’s a lot of wind forecast, but, hopefully, the sun and warmth we have at the moment will hang around.

We’re getting a boost from the Gulf Stream current that was a welcome change after the cold and fog leaving Newport that is only just emerging from winter. With almost every other port stopover taking place in summer, Rhode Island in May was a shock to the system. But it was still a great stopover; they love their sailing there, and everyone you meet knows the race, and there was a great fleet afloat for the send-off.

My first few days were spent resting to allow my back injury to heal following the accident in the closing hours of the last leg when I was washed off my feet and into a hard corner of the deck. My whole family was there so we were all together for the first time since before Christmas.

Which it is just as well that I got that rest as my designated bunk this leg is the furthest aft (towards the back of the boat) and is half the size of my usual bunk that is luxury by comparison; it’s a bit of a shock to the system. But I’m so tired when I go off-watch I go straight to sleep anyway.

Having our own kitchen facility in Newport meant I got to do some cooking, and I made a big batch of Avoca-style rice crispy squares for the crew, and these are going down very well.

We’ve been carrying a GEOMAR monitoring device the whole way around the world that measures micro-plastics in the ocean, and the results were announced in Newport. Basically, there’s nowhere free of micro-plastics; we even detected them at Point Nemo, the furthest point from land anywhere on the planet. It’s shocked of all us to think of how much human activity has impacted the planet.

I’ve made small changes such as not buying single-use containers for water or coffee, but bringing my reusable bottles and cups. It quickly became normal so isn’t a problem, and, hopefully, if more of us make the small changes we can make an impact.

Everywhere the race has gone we’ve tried to reduce our plastic use, and use water refill stations and biodegradable cups.

It’s looking like this will be a nine-day leg as we click down the 3,300 nautical miles to the finish, probably next Tuesday.We won’t be stopping in Ireland, but being that close to home is very exciting. It’s going to be great!

In conversation with David Branigan