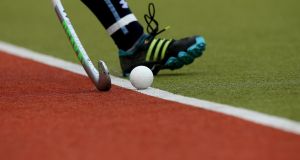 From there they defended superbly, as they had done all weekend, with Christine Quinlan – in her final games before retirement – excelling alongside Esteves, while Liz Murphy was a front-runner for goalkeeper of the tournament.

The win saw Monkstown finish in fifth place in the competition, avoiding relegation from the second tier of European competition with something to spare. Their performances were also enough to keep Ireland in sixth place on the nations’ list – despite UCD’s eighth place finish in London over the weekend in the elite Cup competition – and with it means Loreto will contest the top tier in 2019 and UCD the second level.

The news was not so good on the men’s front, however, as Scottish side Grange won the Euro Trophy in Vienna. This was enough to move Scotland above Ireland on the EuroHockey League rankings list, reducing the Irish quota to one from two. It means Three Rock Rovers will play in Round 1 in Barcelona in October, while Glenanne miss out and will play in the Trophy in 2019.

The Irish under-21 men, meanwhile, started off their US tour in style, with Julian Dale scoring a hat trick in a 3-1 win over Japan at Yale. Jonny Caren’s team will play the hosting USA twice this week, while also playing Japan for a second time.

Munster cruise past Ospreys on a dead rubber day at Thomond 15:47
Real Steel sees off stablemate Footpad at Thurles 15:36
14-man Saracens on the brink of last-eight after edging Racing 92 15:22
Class is permanent for Lee Westwood as he claims Abu Dhabi title 13:43
Saracens accept Premiership relegation and issue apology 11:05
Here is your handy guide to sport on television this week