Annalise Murpy: After 5,700 miles almost the entire standings for the fleet upended 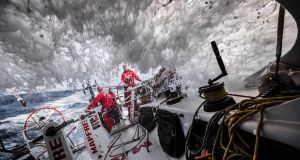 At last, a bed! A warm, soft, dry bed – not angled constantly at 30 degrees or pitching.

Better still, it’s in an apartment close to the waterfront in the centre of Newport, Rhode Island, with its own kitchen so a chance to practice my chef skills.

Both are a welcome distraction to the last two weeks or so and the eighth leg of the Volvo Ocean Race on board Turn the Tide on Plastic that has just ended.

After 5,700 nautical miles from Itajai, Brazil, almost the entire standings for the fleet were upended, within sight of the finish.

Or it would have been in sight were it not for the fog that shrouded Fort Adams and the race village.

With that fog came a dead calm together with the tide running against us.

I was off-watch and sleeping on a stack of sails in the bow, all of us keeping our weight forward for best trim of the boat, wearing three layers of thermal gear but still freezing cold.

When I came on watch I said: “Look guys, only six miles to the finish!”

But it was another 12 hours before we crossed the line. Maybe I shouldn’t have said anything.

We were so close to achieving our longed-for podium place but yet again it was not to be, denied by the twists of ocean racing.

As mentioned in previous logs, our teamwork and performance has really come on a lot over the past eight months. We’re definitely able to hold our own with the other six teams, possibly better in some situations. We are not the underdogs any longer despite holding seventh and last place in the overall standings.

For almost a full week at the start of this leg, we held the lead, properly earned and not by chance. After slipping into a drag race up past the Caribbean and Bermuda, we remained in the hunt among the leading boats, well placed for a battle at the finish.

In the end, as the wind started to fade, we rolled the dice and opted to sail one side of a marine traffic exclusion zone while the leading boats went the other.

Our tactic looked like it was going to pay off as the fleet converged just a few miles from the finish; at one point we were less than two miles from the leader.

But then the breeze faded and we were on the wrong side of the course for the foul tide. We were powerless as our position slipped from fourth to fifth and then, out of the gloom, Team Akzonobel appeared from behind us to within 30m and passed by in the driftathon.

And so we placed sixth for the leg.

Up front, there was plenty of upheaval in the overall standings as Xabi Fernandez’s hugely experienced Mapfre crew made good on their steady advance over the past few days and slipped ahead of leg leader Brunel.

They have now regained the overall lead in the race with just the transatlantic leg in 10 days’ time remaining.

In fact, we have just spent longer at sea in the last leg than we’re likely to race in the remaining stages.

We’re disappointed, but still cheered because our team has gelled and is working well, so we still have a chance at reaching our goal.

As for the leg finish, the light winds were the opposite of what we’ve experienced for most of the last two weeks.

We sailed through a gale after passing Bermuda and it was here that I experienced first hand how perilous these boats can be.

I was on the winch grinder on the leeward side of the boat (the lower side when the boat is heeled). I prefer this as there’s more shelter from the worst of the waves breaking across the deck.

Normally, I’m clipped on to the frame surrounding the steering wheel, but just as I unclipped from here to move forward and clip on to the next strong point, the boat pitched up and I was thrown down to leeward and against a hard corner. The pain was instant and I thought I had broken a rib. In the same moment I knew that I was exposed and that the next breaking wave could catch me. I’d be powerless in the deluge of water.

I managed to get going again but the pain was pretty bad for the next two days. I’ll be checked out by the doctors now that we’re ashore and hopefully it’s just bruising.

In spite of this and the result, it’s been a fabulous leg. After sailing into the thick weed of the Sargasso Sea, once clear we were wondering if we’d ever see marine wildlife again.

On the approaches to Newport, we were escorted by plenty of dolphins , a pod of about 20 pilot whales and what was probably a humpback whale that breached close to the boat.

We’ll probably see more in the next leg. It will be colder and very wet, but we’ll be heading to Cardiff and getting that bit closer to home.