Pakistan Cricket Board set to invite Ireland for winter tour 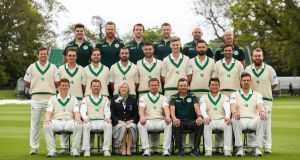 Cricket Ireland president Aideen Rice and the Ireland players, coaches and backroom team pose for the official photograph at Malahide ahead of the first Test match against Pakistan on Friday. Photograph: Billy Stickland/Inpho

Cricket Ireland have welcomed news that the Pakistan Cricket Board (PCB) are ready to offer an invite to Ireland to tour the country later this year.

Pakistan will provide the opposition for Ireland’s historic first Test match in Malahide later this week, but the two sides could be seeing a lot more of each other in the coming months according to reports from Pakistan.

Pakistan have not hosted a Test match in the country since 2009, when six security men and two civilians died in a terrorist attack targeting the visiting Sri Lankan team buses in Lahore, with players and match officials also suffering injuries.

Since then, Pakistan have played their home matches in the United Arab Emirates, with a couple of one-day and T20 series taking place in Pakistan since 2015.

Zimbabwe were the first international side to return, in a three-match one-day international series in Lahore in 2015, while Sri Lanka made their return in September last year for three T20 internationals in the same city.

At the beginning of April this year, the West Indies played three T20 internationals in Karachi, losing 3-0, while the final and playoffs of the Pakistan Super League, theat includes international players, have been played in the country.

Ireland were in talks to travel to Pakistan in 2014 for a tour before a terrorist group aligned to al-Qaeda launched an attack on Jinnah International Airport in Karachi, in which 36 people were killed, including all 10 attackers.

Ireland cancelled their plans to visit after the attack having held discussions with both the Department of Foreign Affairs in Dublin and the Foreign Office in London.

Cricket Ireland high-performance director Richard Holdsworth welcomed the news of a possible invite being offered in Dublin this week, but again stressed that security will be key to the decision.

“That’s great news if that’s the case, but we are not aware of that yet,” said Holdsworth, who was at Malahide as the Irish team trained and work continued to turn the ground into a 6,500-capacity Test cricket ground for Friday’s first day of play.

“The PCB have been very supportive of us over the years in Ireland, they’ve travelled here several times for one-day series and obviously now this historic Test.

“So, of course we would want to help them in their way back to international cricket at home. As we did last time, we’ll look at the situation, look at the security. They’ve now had a couple of teams go there recently, which is obviously very encouraging for them and their cricket. And we know what their supporters are like, they’ve been starved of international cricket at home for a long time.

“So, for us, to help play a part in that would be wonderful but we need to obviously look at the situation, talk with them, get advice as we’ve done before and discuss it with our players, which will be the key part of it.”

Holdsworth pointed out that Ireland have a busy summer of cricket coming up, with India coming to Malahide for two high-profile T20 internationals in June, but that the winter programme has still to be finalised.

“We’ve got a few gaps next winter but we’ll have those discussions and then put the wheels in motion in terms of talking to government; talking to security advisers and seeing what we think may be possible,” he added. “But I know our players in the past have been supportive to the idea as long as we can certainly guarantee that all the safety issues are being dealt with.”

Ireland undertook a training session at Malahide between the showers on Tuesday afternoon, with opening bowler Tim Murtagh arriving in Dublin after playing in Middlesex’s County Championship defeat to Sussex in Hove to complete coach Graham Ford’s 14-man squad and allow for the official squad photograph to be taken with new Cricket Ireland president Aideen Rice.

Paul Stirling stood on the sidelines for the pre-training game of five-a-side football but the hard-hitting batsman confirmed that the calf tightness that kept him out of Middlesex’s match will not keep him from making his Test debut on Friday.

Pakistan arrived in Dublin on Tuesday following their nine-wicket win over Northamptonshire on Monday. Middle-order batsman Asad Shafiq made an unbeaten 186 in the first innings of that four-day game, while 19-year-old leg-spinner Shadab Khan took 10 wickets. Both teams will train at Malahide again on Wednesday.

Cricket Ireland confirmed that tickets are still available for Friday’s first day of play, but they cannot guarantee that there will be walk-ups available on the morning. The forecast presently is for a dry and cloudy morning, but with showers moving in from the west.