Kenyan world champion is said to be aware of allegations 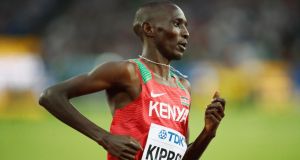 Kenya’s Asbel Kiprop competes in the Men’s 1500 metres semi-finals during the World Athletics Championships in London in 2017. Photograph: Andy Lyons/Getty Images for IAAF

Asbel Kiprop, a three-times world and Olympic 1500m gold medallist, is understood to have tested positive for the banned blood-boosting drug EPO.

It is understood that Kiprop is aware of the allegations but believes there is an error with his sample and he is fighting his case. The sample was taken in an out-of-competition test late in 2017.

The Athletics Integrity Unit, which processes all doping tests in track and field, is unable to confirm the result of any tests under the World Anti-Doping code.

Kiprop’s agent Frederico Rosa told the Guardian he had “heard the rumours as well” but didn’t have any other information.

“I need to wait when I know the real story,” he added.

There have been rumours that a major Kenyan star had failed a drug test inside the sport for some time and on Wednesday the Kenyan newspaper the Standard quoted “impeccable sources” which had suggested an unnamed athlete has tested positive for the performance-enhancing drug erythropoietin, which boosts the production of red blood cells and encourage more oxygen flow in the body.

If it is confirmed that the 28-year-old has failed a drug test it would be a huge blow to Kenyan athletics.

Kiprop is one of the biggest names in Kenyan sport, having won three world titles in 2011, 2013 and 2015 as well as Olympic gold in 2008. Originally he was beaten in that race by the Bahraini Rashid Ramzi, however was upgraded when Ramzi tested positive for a performance-enhancing drug.

In 2013 he was involved in a serious car accident when he lost control on a sharp turn and crashed. According to reports at the time, the wrecked car was approximately a metre away from rolling off a cliff but the vehicle was stopped by a rock which was locked underneath the car.

The 21-year-old Jebet was born and trains in Kenya but controversially switched allegiances to run for Bahrain after being approached as a 16-year-old and promised a full scholarship to take an animal health degree in the country.

More than 40 Kenyan athletes have tested positive for doping over the past five years and in 2015 Kenya was deemed “non-compliant” by the World Anti-Doping Agency only to be reinstated before the Rio Olympics.

However many athletes have suggested not enough is done to test athletes training in the country. The Canadian runner Reid Coolsaet said in 2016: “Kenyan-style anti-doping test. Notify us the night before. One-hour drive to test site at 5am. Many Olympic medallists in house. It was an IAAF accredited test. Procedures are far from what I’m used to in Canada.”

In 2013 another high-profile Kenyan, Mathew Kisorio, told the German broadcaster ARD he took illegal drugs “because everyone told me, I wasn’t the only one – and none of the others got caught for doping”.

He added: “I know a lot of medical substances are used, which are injected straight to the blood for the body to have more oxygen. And when you run, you run so smooth. You have more stamina.” – Guardian service