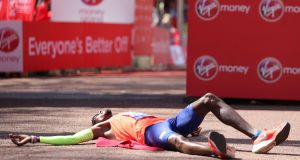 Looking a sort of ghostly shadow of his recent self, his stride more laboured than loping, Mo Farah crossed the finish line of the London Marathon in third place, two minutes and four seconds behind winner Eliud Kipchoge, as humbled if not as humanly broken as he’s ever been.

Farah then briefly stumbled, put both hands on his knees, and shook his head with the look of a man who’d just been through a different sort of pain barrier, before lying flat down on his back. Such are the lessons of the track runner first moving up to the marathon proper.

Still not long afterwards Farah was admitting both his satisfaction and intention to go faster, in no way doubting the marathon would be his perfect distance come Tokyo 2020. Only anyone who has run 26.2 miles knows it’s not the distance that kills, it’s the pace – and that’s what ultimately killed Farah’s chances of winning.

“Eliud’s a great athlete, he makes it look so easy. And it was a great field today. So to break a British record and finish on the podium, is good for me. I really enjoyed it... Even the last 10km when I was bolloxed.”

Farah then talked about running another marathon in the autumn, possibly the World Champions marathon in Doha 2019, before Tokyo 2020: only to master the distance by then he must also conquer Kipchoge, the 33 year-old Kenyan with the best marathon record in history when it comes to lasting the distance and the pace.

Kipchoge took the win in 2:04:17, outside his own London Marathon course record of 2:03:05, set here two years ago. A thoroughly conquering run nonetheless, and leaves him winning 10 of his 11 marathon starts, including the Olympic title in Rio in 2016.

For Farah the pace began to takes its toll as early as 17 miles, even before hitting the proverbial wall: just before halfway he also ran into trouble, failing to collect the correct bottle at the drinks station, and with that dropped some 20 metres on the leaders.

Farah did close that again, but once Kipchoge decisively broke for home around 17 miles there was no holding him back. It was the largely unheralded Tola Kitata, the 21 year-old from Ethiopia, who held on to Kipchoge the longest, finishing second in 2:04:49, a personal best.

“I’m satisfied with the result,” added Farah. “I can’t do any better than what I did. I got a personal best. I fought as much as I could. You be a man, fight like a man, or start off in the back and regret later on.

“The guys just went for it, at world record pace. It was do or die. I hung as much as I could but it is so different to the track – it is different pain. If I can run 2:06 here, in a major championship, it shows I can be competitive. After 30K, I was definitely feeling it; obviously with the pace slowed down a bit, I was tired but managed to hang in there and come away third.’”

It was Farah’s first marathon ‘proper’, after a self-proclaimed ‘test run’ in London four years ago, when he finished eighth in 2:08.21. There was certainly a lesson in the drinks station around halfway: “(It)was quite a confusion,” he said. “I was table four, but the staff was trying to take pictures and I was trying to take a drink. Me and the other athlete from Ethiopia had the exact same bottle and were on the same table too. So when I was trying to grab my drink I was grabbing his drink and he was grabbing my drink. So I was telling the people ‘can you please just tell us which one is our drink because it’s exactly the same bottle.”

Kipchoge is now unquestionably the best men’s marathon runner around, this his third title in London – also winning in 2015 and 2016: his record on the road and the track is also second to none, beginning as an 18 year-old when winning the 5,000m at the 2003 World Championships in Paris.

The elite field passed halfway in 61:01 – exactly as scheduled, inside world record pace, and the fastest half-way split in major marathon history. The warm conditions played some part in the drop off in pace afterwards, though Kipchoge never once looked troubled, the man who won last year at Monza race track ran 2:00:25, ruled out for record purposes because of a few little gimmicks, but a superhuman effort nonetheless.

There was a fine race run by the top Irish entry Stephen Scullion, who finished 12th overall in a personal best of 2:15:55, the Belfast also booking his place on the Irish team for the European Championships in Berlin this summer.

In the women’s race, Kenya’s Mary Keitany also set out on world record pace - before suddenly succumbing to the distance and the pace. Instead she was run down by fellow Kenyam Vivian Cheruiyot, four-time World champion on the track, at 34 the reigning Olympic champion over 5,000m, paced herself to perfection, winning in 2:18:31, the fourth fastest in women’s marathon history.

Brigid Kosgei took second 2:20:12, also from Kenya, while finished fairly out on her feet in fifth was Keitany, in 2:24:27. Still proving untouchable then is Paula Radcliffe’s world record of 2:15:25, set in London 15 years ago.