Newcomer hits impressive 83 as Joe Root’s side post 194 for four from 80.3 overs 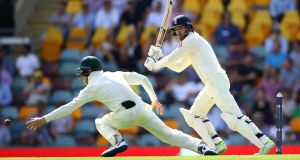 England’s James Vince bats during day one of the First Test against Australia in the Ashes at The Gabba in Brisbane, Australia. Photograph: Cameron Spencer/Getty Images

James Vince said that if Australia did not know some of England’s less-vaunted names before the start of their Ashes defence then they will do now following an absorbing first day at the Gabba in which his maiden Test half-century proved the standout innings for the tourists.

Arriving at the crease just 10 minutes into the series opener after the early loss of Alastair Cook, Vince shone with a watchful 83. It helped Joe Root’s side post 194 for four from 80.3 overs – rain wiped out 90 minutes of play – with the impressive Pat Cummins picking up two of the wickets for the hosts.

Matthew Hayden, the former Australia opener, had described England as a “rabble” in the series build-up, claiming not to have heard of half their players.

The words acted as motivation to Vince, who added 125 for the second wicket with the similarly unheralded Mark Stoneman (53), and watched another newcomer in Dawid Malan reach the close unbeaten on 28.

Vince, whose previous stab at Test cricket in 2016 returned a top score of just 42, said: “It was great to get off to a good start. Reading comments like that give you an extra incentive to go out there and make a statement. It was nice to spend some time in the middle, get some confidence and if [Hayden] didn’t know who we were at the start of the day, he probably does now.

“If I could have my first go at Test cricket again I would, but it’s in the past. I’ve been focused for the last month on trying to capitalise on this opportunity and get myself nailed down in the team.”

Vince earned a life on 68 when dropped by Australia’s similarly surprising call-up, the wicketkeeper Tim Paine, and admitted the night may be spent thinking about missing out on a Test century, having been run out by Nathan Lyon 17 runs short of the milestone when attempting a single that was never there.

If that breakthrough was a relief for Steve Smith’s favourites, then the key strike came with the wicket of Root, trapped lbw for 15 by Cummins. Australians always talk up targeting the opposition captain and for the injury-plagued quick, playing his first home Test six years after his debut, it was particularly sweet.

“In terms of fast bowler’s wickets, it’s pretty much the dream wicket,” said Cummins, who had earlier cleaned up Stoneman.

“It was one of the most satisfying wickets I have ever got. I set him up with a couple of outswingers and then tried to bowl one big inswinger. It probably only comes out one in 100 times but when it does it’s pretty special. And it was their captain, so I couldn’t be happier.

“It has been such a long build-up. Everyone has been talking about this game for months, so to get here, be selected in the side and sing the anthem in front of a packed house, I thought: ‘How good is this?’ to play my first Ashes Test and first Test in Australia.”

Lyon, whose talk of ending careers earlier in the week had dominated the headlines, was arguably the pick of the Australia attack, with his 24 overs costing just 40 runs and allowing the pace bowlers to refresh between spells. Paine’s drop of Vince came off his bowling.

Cummins said of the off-spinner: “I told him he should say something like that before every game the way he bowled today. He was loving it. He’s one of those guys who loves getting into the contest. I don’t know how he doesn’t have a six-fer, let alone one.” – Guardian Service