James Vince intends to make himself a household name in Australia 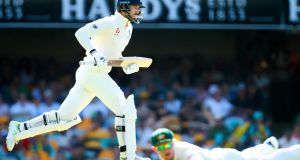 James Vince intends to ensure everyone in Australia knows who he is for the rest of this winter’s Ashes.

That includes Australia great Matthew Hayden after Vince’s 83 at the Gabba helped the tourists to 196 for four on a cagey, rain-shortened first day of the series.

Vince, who has previously played down under as an overseas star for Sydney Thunder, was spurred on to make a success of his Test comeback after hearing Hayden join the Australian chorus querying the international pedigree of the majority of the England team.

Former Test opener Hayden singled out captain Joe Root and other senior players, but otherwise described England as a “rabble” — before asking “Who are they?”

Vince also had critics to answer back home, where many questioned his inclusion on this tour after he was dropped with a sub-20 average and joint top-score of 42 in seven Tests up to August last year.

“Reading comments like that almost gives you an extra incentive to go out there and try to make a statement,” said the 26-year-old England number three, who shared a crucial century stand with opener Mark Stoneman (53).

“If he (Hayden) didn’t know who we were at the start of the day, he probably does now.

“I guess it just gives you a bit more inspiration and fight to go out there and try to prove people wrong.”

Vince naturally had mixed feelings nonetheless, after he was run out by Nathan Lyon’s direct-hit from cover with a century on Ashes debut apparently beckoning.

“In hindsight I wouldn’t take the run, but it was a good pick-up and throw,” he said of the off-spinner, who was far from flattered by his figures of 24-9-40-0.

“He bowled pretty well, and deserved something from the day.

“It’s disappointing obviously — no matter what score a batter gets, they always want more.

“I’m sure lying in bed I’ll have a few thoughts about it, but at the start of the day if you’d offered me 80-odd I probably would have taken it.”

Lyon caused a stir two days before the start of the series with an incendiary press conference, in which he claimed he was hoping to help end some England careers this winter.

He could not keep out of the action once on the pitch either.

Team-mate Pat Cummins said: “We talk about special plays, or an outstanding effort, and for us today that cracked open the partnership when Vince was looking pretty set.

“It was a huge effort. I thought he bowled absolutely beautifully today. I don’t know how he doesn’t have six-for, let alone one.

“I said to him he should say stuff before every game, with the way he bowled today.”

Vince, meanwhile, is hoping his England return continues on the up.

“I’ve been focused to try to capitalise on this opportunity and get myself nailed-down in the team.

“There’s plenty of cricket left in this series, and I hope I can kick on from here and make some bigger contributions.”