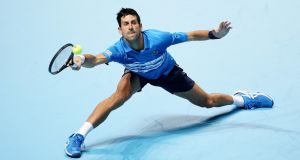 World No 1 Novak Djokovic dealt a further blow to the hopes of the US Open going ahead after claiming it would be “impossible” to play under the “extreme” proposed safety protocols. Photograph: Tess Derry/PA Wire

The US Open will join Wimbledon on the 2020 tennis scrapheap unless key players and other stakeholders can be persuaded over the weekend that it will be safe to travel to New York in late August, when the tournament is scheduled to begin. It does not look promising.

Video-conference talks this week between the tournament’s organisers, the United States Tennis Association, and more than 400 players across the rankings spectrum, as well as coaches and representatives of the ATP and WTA, have revealed serious divisions before Monday’s deadline.

For many leading players – notably Novak Djokovic, Rafael Nadal, Simona Halep and Nick Kyrgios – the threat of the coronavirus pandemic and severe restrictions on their movement and preparation override career or financial concerns, while the cash-strapped USTA is desperate to hold the event. The men’s and women’s organising bodies are supportive but sceptical.

The USTA president, Patrick Galbraith, told the international web meeting on Wednesday: “We have less than a week to go, so we need to finalise what we will do.” The plan, which Djokovic has railed against most strongly, is to create a “bubble” for players and all tournament participants in airport hotels, while limiting their entourage to a single assistant.

If Galbraith and his team fail to persuade enough star players to agree to strict conditions, the USTA will explore the possibility of moving the championships out of state, but options are seriously limited. Speculation that Indian Wells might host the tournament has evaporated after news of a fresh Covid-19 surge in California.

The Australian Open, where Djokovic won his 17th Major, might yet be the season’s only Major after the cancellation of this month’s Wimbledon and with a cloud still hanging over the US and French Opens. The bold unilateral move by Roland Garros to switch from May to September looks to have created the best chance of another Major going ahead before the Australian Open in January – when Roger Federer hopes to return after abandoning his 2020 schedule to recover from a second knee operation.

In New York, meanwhile, negotiations grow more fevered. Leaks from Wednesday’s meeting – which went ahead with scant notice for the tennis media – suggest little unanimity. There is concern among fringe players about plans to scrap the qualifying tournament and cut the doubles list from 64 to 24 pairs.

According to the Spanish newspaper Marca, a WhatsApp group of the top 100 players revealed no enthusiasm for “travelling to New York and being locked up for a month”.

Halep, No 2 in the women’s rankings, told the New York Times: “It’s important to understand that everyone has individual needs and circumstances, and we should do what’s best for our personal health and also think long term about our career.”

Stacey Allaster, who this week was installed as the first female chief executive of the USTA, has been lumbered with a financial nightmare. One of the game’s most influential voices, Billie Jean King – the 12-time Slam winner after whom the venue is named – told the Radio 4 Today programme on Thursday she expects the tournament to go ahead, along with the Cincinnati Open, which would be held on the same site (the total bill for which would be $30 million) but “probably with no people watching”. She added: “They have been working on this diligently, as have the ATP and the WTA. You cannot believe the work they’ve all done to make this happen . . . hopefully.”

Hope would seem to be all that organisers have at this point. The dilemma for the USTA is it must commit to a decision on Monday without knowing how conditions will change over the next six weeks. Wimbledon opted for caution in similar circumstances. We should know soon if the Americans do likewise, or gamble. – Guardian