Gina Akpe-Moses: ‘It’s scary to think about bringing a child into this world as a black female’ 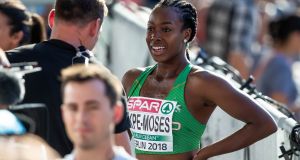 Gina Akpe-Moses: ‘I don’t want to raise my children in a world where I have to tell them to be careful just walking down the street’ Photograph: Morgan Treacy/Inpho

Gina Akpe-Moses ends the interview with a sprinter’s flourish; her words bound by idealism and terrifying reality.

“I wish I could travel back in time and eradicate the idea of racism. Everyone’s life would be so different, everything would be a lot better. But I can’t do that. I have to live through the pain and try my best to make a difference, because I don’t want to raise my children in a world where I have to tell them to be careful just walking down the street or to be afraid of the police – who are meant to protect us.

“It’s scary to think about bringing a child into this world as a black female. I saw a little girl marching in the protest and I was like: ‘You are so small, you should be going to the park, you should be living a childhood, not having to protest to get the police to stop killing your people.’”

Gina Moses will keep tweeting until you do. She hasn’t stopped since May 25th, when the murder of George Floyd by police officers in Minneapolis rejuvenated the Black Lives Matter human rights movement.

“Patiently waiting for the athletics community to speak up,” she said last week at the height of tear gassing and ricocheting rubber bullets. “The silence is deafening,” responded Dina Asher-Smith, Britain’s current world champion over 200 metres.

“I mean the governing bodies!” she clarified. “I haven’t seen one federation speak up, bearing in mind they literally feed off their black athletes.”

Pinned tweets of support from official British and Irish governing bodies followed but blacked out screen on so many white sports people’s Instagram pages are not enough for someone like Akpe-Moses who has spent her life being reminded she is different.

Born in Nigeria but raised in Dundalk since she was three years old, until moving to Birmingham in 2014, she won 100 metres gold for Ireland at the European junior championships in 2017. Now living in east London, and still training her heart out to reach the Tokyo Olympics, the necessary tunnel vision has been blurred by the waves of global protest.

“You know when you just reach your limit? You can take so much but once you reach that tipping point, everything comes out.”

The tipping point happened on May 28th when Hennepin County attorney Mike Freeman, before the four policemen had been charged, added “there is other evidence that does not support a criminal charge” to his “we have to do this right” speech.

No amount of clarification could alter what black people heard.

“They tried to say the police officer did not kill George Floyd even though there was video evidence,” said Akpe-Moses. “It was blatant. You can’t put a knee on someone’s neck for eight minutes and 46 seconds and say that’s not the reason for killing him.

“The police officer chose to put all his body weight on George Floyd’s windpipe so he couldn’t get sufficient air to breathe. It was so brutal. That’s when everyone said: ‘We are going on a big revolt and we are going to get ourselves heard properly.’”

The psychology student hasn’t stopped talking either, be it on Irish radio or television, and that’s because she believes silence is no longer an option.

“I feel like it would be selfish not to speak out about what’s happening because I am a black person who has a bit of a platform.”

Athletes protesting police brutality are still represented by Colin Kaepernick’s NFL career being frozen since he took a knee in 2016. Nike stayed with him but that is another day’s work.

“I am not concerned,” she confidently stated. “If you’re going to try to reprimand me for speaking out about such a big issue then I don’t want to be part of your establishment or a part of your company.

“I should not be told to hold back for the fear of losing sponsorship. People are scared but you shouldn’t be scared.”

Ellis Genge, the England prop, has been tweeting too.

“I’m actually f**ked off with this happening to every mixed race or black sports person,” he said after the BBC this week posted an article about him under teammate Lewis Ludlam’s picture. In January BBC News at Ten apologised for leading with a montage of LeBron James on the day Kobe Bryant died.

When Akpe-Moses looks at coverage of the London protests by the mainstream media she believes “there is a bit of propaganda going on”.

“I feel the media are making out black people are the aggressors all the time. It was a peaceful protest. Peaceful is the key word.

“In London the black community feels the pain of black Americans. You know [the Notting Hill] Carnival? Everyone would be carrying the same bag – for water, phones – but it is only black males who are searched at these events. Why do the police have to constantly target black people when we are trying to enjoy ourselves? We don’t need people thinking we are trying to cause trouble.

“Even a black female I know was driving home and got stopped: ‘Is there any drugs in your car?’ Why is it always black people who are chosen for random drug searches? Why not other races? It’s frustrating because we are really just trying to get home.”

Growing up in Louth racism came packaged as jokes.

“The odd ignorant comment, which is slightly racist, about my hair or people tanning to be ‘as dark as me’. They think it is funny. It is offensive.

“The vibe I got from Irish people is they are quite ignorant about racism because they haven’t been educated about it.”

Her sister Joy Akpe-Moses studies law at Trinity yet it’s their teenage brother in Birmingham that she worries about.

“He is only 17 and I have to keep telling him: ‘When you go out make sure to be careful. If there are police around, stay away from them.’”

We ask about cultural appropriation or “blackfishing” as highlighted by Irish author Emma Dabiri in 2018.

“I think that is absolutely crazy. The fact there are debates about white people not being able to use the word n****r and when all this happens the same white people are silent. People identifying as black, even though they are white: ‘I can wear braids, I identify with black culture’ . . . but in order to do this you need to stick with us through everything, the killing, the brutality. We don’t get to pick and choose, so why should you get to pick and choose?”

The point of ‘Blackout Tuesday’ she explains, was to educate the ignorant about what is happening to black people in modern society. The hope is some will stumble onto the essays of Ta-Nehisi Coates or Wesley Lowery’s reporting from Ferguson.

“Comprehension is key. You can listen but if you don’t understand what’s the point? You have to understand what you are being taught. It is exhausting to have to explain it over and over again. Watch some documentaries, read some books, Google the questions you keep asking me. Once you get the information, once you educate yourself, then come ask questions so you can get a personal perspective on it.”

“I know they have the Civil Rights Act but that is just a piece of paper. What they are doing in the US does not correlate with what is written down in law. Even if the protests stop in the next couple of days it is still going to be spoken about. I will talk about it whenever I am asked.

“Until we see change – physically see the change – why should we stop fighting for it? This fight has been going on for how many years? What’s the point in stopping now?”