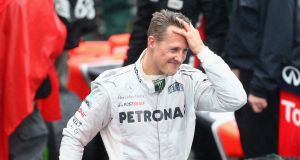 Reports that Michael Schumacher is to undergo stem cell surgery within days are inaccurate, it is understood. The Schumacher family declined to comment on reports being widely published on Thursday but it is believed they would not consider any such operation during the coronavirus outbreak.

Schumacher is still in recovery after a skiing accident in 2013. The seven-times Formula One champion, who was in a coma for six months, is being cared for at home in Switzerland.

Reports in the Italian media claimed the stem cell operation would be performed by the French cardiologist Dr Philippe Menasche, who is understood to have operated on Schumacher late last year.

A representative of the Schumacher family reiterated their long-held position in declining to comment on private matters or speculation on the former Ferrari driver’s condition. It is understood that while surgery may take place at some point it will not occur while the health risks attached to coronavirus remain.

Schumacher, 51, is reported to have muscle atrophy and osteoporosis from being confined to bed for six years.

Menasche has pioneered a technique for grafting stem cells on to the heart, replacing damaged cells with healthy ones. The procedure is believed to be safe but there is no evidence it would have any effect on the brain.

The neurosurgeon Dr Nicola Acciari noted that stem cell surgery did not guarantee positive results. “The goal is to regenerate Michael’s nervous system,” she said.

“Over the past 20 years, science has made enormous progress with stem cell treatment. But that does not change that we still do not know much about the brain. We are not able to say what the results will be.”

The Brazilian driver Felipe Massa, Schumacher’s team-mate at Ferrari in 2006, said in May that any recovery would be difficult. “I know how he is, I have information,” he said. “The main thing about all this is that we know his situation is not easy. He is in a difficult phase but we need to respect him and the family.”

Schumacher’s 21-year-old son Mick is a member of the Ferrari academy and will compete in his second season in F2 this year, which opens at the first F1 race of the season in Austria on July 5th. – Guardian