Two IABA board members warn against outside interference 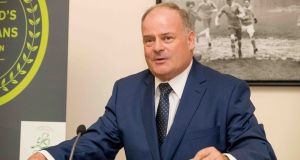 Pat Ryan: “We have to be mindful as a sporting organisation under the banner of AIBA that we are allowed to run our own affairs without interference.” Photograph: Morgan Treacy/Inpho

Two prominent board members of the Irish Athletic Boxing Association (IABA) have warned of the consequences of Government and Sport Ireland meddling in how their sport is run.

If that was found to be the case, Ireland could be banned from participating in international competition. India was suspended in 2012 for ‘possible manipulation’ of elections in the sport. Ireland take part in the European and World Boxing Championships this year.

Ryan’s views were echoed by fellow board member and Leinster president Bernie Harold who said Sport Ireland and Minister O’Donovan are unnecessarily becoming involved in the way Irish boxing is run and that the elected members of the sport have been misrepresented.

In a week in which Irish boxing was described as “deeply divided” by Sport Ireland’s chief executive John Treacy and after boxing officials were summoned to Dublin for a crisis meeting with the Minister, Ryan cautioned about the consequences of interfering.

“I would be very fearful that AIBA would take an interest in the goings on over the last two weeks,” said Ryan. “Absolutely.”

“This is what we have to take cognisance of,” he added. “We have the greatest respect for Government and Sport Ireland. But we have to be mindful as a sporting organisation under the banner of AIBA that we are allowed to run our own affairs without interference.

“There is a separation of powers between the president and board of directors. It’s very important going forward that we are mindful of how we are conducting our business.”

Ms Harold is the first woman to become president of a provincial council in the 104-year history of the association. She added that boxing would survive if funding was pulled. Minster O’Donovan this week said he would support Sport Ireland if they used funding as a leverage to bring the boxing into line with modern governance practices.

“I really wish that John Treacy would stay out of our business and let us get on with it,” she said. “It is absolutely unhelpful, the intervention of John Treacy and of the Minister. It hasn’t helped the situation at all. It has actually made things worse. It is harder to get people to the table when you have interference from the outside.”

“We were invited to a meeting [(by the Minister] on Tuesday morning and myself and Gerry O’Mahony were the only elected people on the board available to be there because we had only got notice the day before.”

“This all came about, I believe, because the minister was contacted by one of his constituents in the Rathkeale Boxing Club. I don’t think it appropriate to spend Government time getting involved in the selection of national teams in any national governing body and I think there are very few other governing bodies they would attempt to do it in.”

At the heart of the problem is division in the sport about how it should move forward with elected members, who largely do their work with little or no funds, dismayed at what they see as unelected members disconnected from boxing.

“As president of the Leinster council in the past five to six months I’ve presided over 800 plus bouts,” said Harold. “That’s all run by volunteers with no funding from Government. We’ve had this sword of Damocles hanging over us about the funding given to the IABA since the Billy Walsh affair. In my opinion 99 per cent of boxing runs without any funding.

“It’s important to note the division is not in boxing per se,” she added. “The problem is with the people put on the board with no connection with boxing. That’s where the division comes, between the elected people and them. The boxing people are united.”

Minister O’Donovan stated earlier this week that he was not politically interfering in boxing.

Rory McIlroy makes a slick start to 2020 with opening 67 22:19
Wolves left to rue profligacy as Liverpool roll on 22:13
Annalise Murphy is runner-up in Melbourne as Round Ireland race takes shape 22:11
Mixed fortunes for Meadow and Maguire on LPGA seasonal bow 20:20
Kellie Harrington guaranteed a medal on her Bulgarian return 19:21
Here is your handy guide to sport on television this week