IABA row is ‘rubbish a junior infant would come out with’ 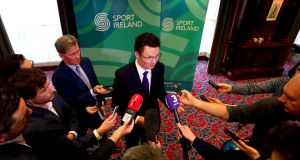 Minister of State for Tourism and Sport Patrick O’Donovan: has said he ‘doesn’t know who’s in charge’ at the Irish Athletic Boxing Association. Photograph: James Crombie/Inpho

Funding withdrawal is the last act available, the ultimate sanction and now the only one left in the armoury of Sport Ireland and Minister of State for Tourism and Sport Patrick O’Donovan. For a year now the Irish Athletic Boxing Association (IABA) has been the recalcitrant child, defiant and unco-operative.

It has kicked and delayed and frustrated and promised. Now, after the broken promise to adopt the 2016 Rio Review and modernise governance in the sport, and after a meeting that the Minister found profoundly confusing, unhelpful and frustrating, he has given license to Sport Ireland to do as they wish to sort out the rancour that has brought boxing to a shuddering halt.

“I can’t stand over a situation where I would have to go into the Dáil and say is it appropriate where there’s a board and maybe another board, and is it possible there is a chairman and somebody else claiming to be the chairman. I don’t know who is in charge,” says Mr O’Donovan.

Now the Minister has followed. It is fair and accurate to say he is fuming, seething in his chair in a hotel near Government buildings.

What he is clear about now is using IABA funding as leverage. What he believes is that money is a legitimate way to haul boxing into line – and maybe the only one remaining.

“Absolutely,” he says on funding. “It’s the only thing that the Government and Sport Ireland have . . . and it’s not a Government decision – it’s the board of Sport Ireland. When John Treacy left my office I said, whatever you decide with your board you have my full and undivided support. We have to be fair to athletes and volunteers. But we’re not happy with what’s happening.

“This isn’t something that they might do but that they must do. They must put down their foot and say there can only be one boss, one board and one set of rules. End of story.

“The secretary general of our department is the accounting officer for the department. Not in a gazillion years would he be able to stand over a set of accounts that show money is being spent within an organisation where the governance is like a fog.”

The Minister was on the Oireachtas Joint Committee on Transport, Tourism and Sport that heard the case of the Billy Walsh saga and his ultimate departure to the USA. Few sympathised with the IABA and its in-built governance anachronisms.

One of the first things he pushed was that issue: governance in sports bodies. He listened to the Oireachtas hearing, and watched the Olympics unravel, was promised change and modernisation and now he’s immersed in another epic controversy.

“This has been an issue that has been an agenda item with the department every single week for the last year with the Billy Walsh situation and the rule book,” he says, exasperated.

“My understanding is the rule book is finished, waiting to be adopted. If they don’t want the rule book and codes of governance they have another road they can go. They can become somebody else’s problem. We’re not hung up on this. If they want to run their own ship, good luck to them. They are not our problem then.

“When I started reading about boxing I saw we had a board and an alternative board. We had a chairman and an alternative chairman. This was like something that you would read out of The West Wing. You had facts and you had alternative facts. I thought, what in the name of god is going on here?

“What I saw in terms of the structure and non-dialogue and in some cases the open adversarial nature within the organisation led me to believe this is a kind of a Ballymagash-type organisation.”

On Wednesday the IABA issued a press statement. It said that the board would like to meet with the Central Council, the primary arena of war within the sport, but that they couldn’t arrange an acceptable time. The board of boxing could not meet with a group of their own members.

At the Wednesday meeting, after Tuesday’s was abandoned when IABA president Pat Ryan didn’t turn up, the Minister was told that the people in the room largely agreed with modernisation but unfortunately there were guys outside the room who may not.

Now they have four weeks and Treacy has been handed the nuclear code.

“I don’t think they have four weeks,” says the Minister, threadbare from the slog. “I think they need to start showing . . . four days . . . issuing a press statement saying a group isn’t able to meet another group?

“They have to stop that nonsense. I don’t want to hear any more ‘Dog ate my homework’ excuses or ‘there was cattle on the line’, this rubbish that a junior infant would come out with. It’s over. As far as I’m concerned it’s over.

“This excuse-giving and toes-dragging . . . I was never more frustrated after a meeting. I came out of that meeting yesterday [Wednesday] totally and absolutely frustrated because I don’t know who is in charge and I honestly don’t know if there is any level of commitment to answer straight questions.

“If that meeting was an Oireachtas hearing there would have been utter and total outrage. If they want to continue along the road of the last 12 months they won’t have us as a passenger.”

“Can you imagine,” he asks. “In any other sport organisation . . . where a group of people in the sport were unavailable to meet the board. The chief executive and the chairman wouldn’t ask. They would instruct. Give a day, make the meeting take place. End of story. I believe there is a real deficit in terms of leadership capability.