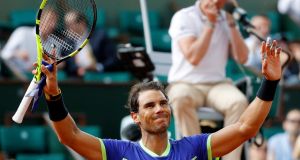 Rafael Nadal laid down a marker as he chases his 10th French Open title with his most one-sided ever victory at Roland Garros.

The fourth seed and favourite to lift the Coupe des Mousquetaires next Sunday allowed Georgia’s Nikoloz Basilashvili just a single game in a 6-0 6-1 6-0 victory.

It is the first time in a completed match at the tournament that Nadal has only lost one game.

The biggest cheer of the match came when Basilashvili, a little-known 25-year-old ranked 63, finally won a game at 6-0 5-0.

But that proved to be as good as it got for the Georgian, whose final tally of five winners and 34 unforced errors rather told its own story.

Nadal hit 27 winners, most of them off his lasso forehand, which is in ominously good shape.

Basilashvili looked like he might be saved by the weather as thunder rumbled overhead late in the third set.

Nadal afforded himself a chuckle as Basilashvili wasted a bit of time by changing his racket.

But the rain did not arrive and he was put out of his misery after an hour and a half, with Nadal moving through to a fourth-round clash with fellow Spaniard Roberto Bautista Agut.