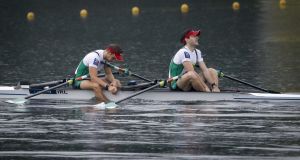 Paul and Gary O’Donovan are into the A Final at the European Rowing Championships in Racice in the Czech Republic. Photograph: Srdjan Stevanovic/Inpho

Paul and Gary O’Donovan produced their best performance of the season so far to finish second in their semi-final and qualify for the A Final at the European Rowing Championships in Racice in the Czech Republic.

As temperatures rose the Ireland lightweight double produced a hot performance, conceding the win to long-time leaders France, but seeing off a late charge by Germany by less than a tenth of a second. The O’Donovan’s had read the race well, moving just before halfway, where they were fourth, and then upping the pace to close within a length of the Olympic champions at the end.

Since the other semi-final, won by Italy, from Britain and Poland, was considerably slower, the odds on a medal for Ireland in Sunday’s final look to have improved dramatically.

Denise Walsh is also a good bet for a medal in her lightweight single sculls final. The Skibbereen woman came up against the clear favourite for gold, Patricia Merz of Switzerland, in the semi-final and the race looked very similar to the A Final at the World Cup in Belgrade - Merz owned the race and won, while Walsh took second.

“The main thing is I’m in a final. Anything can happen,” Walsh said. She must start faster and hold her own in the middle so that she can use her brilliant finish to test Merz in the final.

Ireland’s Mark O’Donovan and Shane O’Driscoll will compete in the A final of the lightweight pair with real hopes of a gold medal. They won at the first event of the season, the World Cup in Belgrade, and also won the race for lanes here.