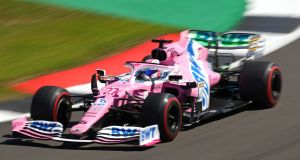 The Racing Point car has caused controversy since it hit the track in testing and was dubbed the “Pink Mercedes”. Photograph: Getty Images

The Racing Point team have been punished by the FIA after they were judged to have illegally copied part of the 2019 Mercedes car. After protests lodged by the Renault team the FIA launched an extensive investigation and on Friday morning published their ruling, stating Racing Point had copied the brake ducts used by Mercedes last season.

F1 also said it would take immediate steps to prevent copycat designs being used in future. The FIA’s head of single seaters, Nikolas Tombazis, said they have agreed with the Formula One owner, Liberty Media, to change the regulations for 2021. “This will prevent teams from using extensive part of photos to copy whole portions of other cars in the way that Racing Point has done,” he said.

“Copying has been taking place in Formula One for a long time. People take photos and sometimes reverse engineer them and make similar concepts. We do not think that this can stop in the future completely. But what we do think is that Racing Point took this to another level. They clearly decided to apply this philosophy for the whole car.”

The Racing Point car has caused controversy since it hit the track in testing and was dubbed the “Pink Mercedes”. The team have admitted they copied the championship-winning 2019 Mercedes, which is not illegal as long as they have designed specific elements, known as “listed parts”, themselves.

However Renault argued that the front and rear brake ducts – key aerodynamic components that control air flow and contribute to downforce and listed parts – were too similar to the 2019 Mercedes to have been designed from scratch.

The FIA ruling concluded the rear brake ducts were “designed in large part by Mercedes”. Mercedes had admitted they supplied information on their 2019 brake ducts because at the time they were not listed parts. However, a subsequent rule change for 2020 meant brake ducts were required to be designed from scratch. The FIA confirmed that had Racing Point questioned whether the 2019 rear brake ducts could be used on their car, they would have been told it was not legal.

Although the team did cooperate with the FIA in their design they did not query the governing body on their brake ducts.

Racing Point can appeal against the decision but have yet to indicate whether they will do so. The team also confirmed on Friday that their driver Sergio Pérez, who missed the British Grand Prix after contracting Covid-19, will also miss this weekend’s 70th Anniversary GP at Silverstone after he tested positive again.

Pérez had been hopeful of returning to the cockpit after fulfilling the government’s quarantine regulations but was dependent on being found clear of the virus. Nico Hülkenberg, drafted in last week to replace him, will once more take his place this weekend. - Guardian