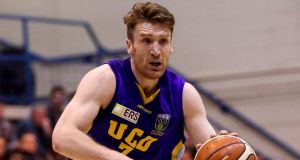 UCD Marian’s Scott Kinevane. “Tralee on Saturday will be another battle. They have had some great results of late, and seem to be the in-form team at the moment.” Photograph: Tommy Dickson/Inpho

All eyes are on the top of the Men’s Super League table this weekend as two of the top teams, UCD Marian and Tralee Warriors prepare for battle on Saturday night.

Indeed, it’s not going to be an easy few days for UCD Marian, who first have to turn their attentions to Thursday’s clash with Éanna in the first game in their double header weekend as they look to regroup after last weekend’s loss to Killester.

“These are two massive games for us this week,” UCD Marian’s Scott Kinevane stated. “Éanna have been very good at home all season, and they have an excellent coach in Pat Glover, who probably knows our team better than any other coach in the league. We will have to match their physicality if we are to get a result.

“Tralee then on Saturday will be another battle. They have had some great results of late, and seem to be the in-form team at the moment. Their ‘floor general’ Trae Pemberton has had an impressive start to 2018, so containing him, and the battle on the boards, will be key in this game.”

For Tralee the trip to Dublin will be a big test for them, and with five teams still battling for top spot in the Men’s Super League it’s a must-win game for both sides.

“It’s in our hands now, and we’re going to have to look in the mirror and figure out if we can handle it,” said Tralee head coach Mark Bernsen. “There are five teams that are knocking on the door of the league title, so this is going to be a very challenging month, and one of the most important ones is this Saturday against Marian.

“If you look at our scores against these three teams we have coming up – Marian included – you probably wouldn’t give us much of a chance, but we’re a little stronger mentally right now, and if we don’t do it it won’t be for lack of preparation or desire.”

Indeed, all of the top five teams are in action this weekend, with second place Swords Thunder welcoming Moycullen on Saturday evening, fourth place Killester on the road to Maree where they will face a tough challenge, and fifth place Templeogue facing Belfast Star at home.

Elsewhere, KUBS and DCU Saints will do battle at Greendale, while UCC Demons welcome Éanna on Sunday as the Cork side aims to maintain their top six spot in the league.

Meanwhile, it’s a big midlands derby in the Women’s Super League this weekend as Portlaoise Panthers prepares to welcome near neighbours IT Carlow Basketball to St Mary’s Hall in Portlaoise on Saturday evening.

Both teams need a win this weekend to stay just above the danger zone of relegation, and it’s set to be a big battle with the teams evenly matched across the court. Portlaoise took the honours the last time the sides met in Carlow, so the visitors will be hoping to reverse that scoreline this weekend.

Elsewhere, league leaders Courtyard Liffey Celtics will need to remain focused this weekend as they travel to WIT Wildcats. Celtics can’t afford to drop a game at the moment, with UCC Glanmire and DCU both in joint second position behind the Kildare team, with the latter facing Brunell on Sunday.

Killester will host their last home game of the season, meanwhile, as they welcome bottom of the table NUIG to the IWA in Clontarf.

In the Men’s Division One the competition for league honours is really heating up with three teams currently doing battle for glory. Killorglin still top the league, but Neptune and Ballincollig are just behind them, and Killorglin face off against Ballincollig this Saturday and Neptune the following weekend, ensuring a thrilling finish to the division.