Ghanaian and Jamaican duo dream all way to Pyeongchang

‘I want to show black people, people from warm countries, can do this as well’ 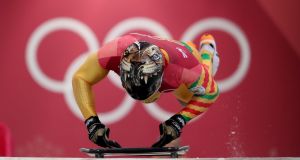 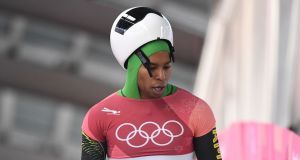 One is a former illegal immigrant from Ghana who sold vacuum cleaners door to door to fund his “crazy” Winter Olympic dream. The other is a Jamaican who turned down a role as a hyena in the Broadway production of The Lion King to pursue an identical, if seemingly impossible, goal.

Yet somehow Anthony Watson of Jamaica and Akwasi Frimpong of Ghana ended up pinging around a skeleton track at the Winter Olympics on Thursday, turning heads and creating history. It barely mattered they were the slowest by some distance, because when they hugged and told the world how their stories had converged there was barely a dry eye in the house.

Frimpong’s extraordinary journey from a tiny one-bed home in Ghana, which he shared with 10 others as a child, to Pyeongchang was jolting and uplifting. Aged eight he had come to the Netherlands with his mother, where he lived as an illegal immigrant, but while he soon made waves as a talented sprinter he had a massive problem: he feared competing internationally because he worried he would never be let back into his adopted country.

His solution was to tell his coaches he had lost his passport. It took until 2008, when Frimpong was 22, before he gained residency but his hopes of competing as a sprinter at London 2012 ended when he ripped his Achilles tendon. Two years later, when he missed out on the Dutch bobsleigh team for the Winter Olympics in Sochi, he thought his career was over. His wife Erica had other ideas.

“In July 2015, she told me: ‘I don’t want you to be 99 years old and still whining about your Olympic dream,” he said, choking back tears. “So I spent two years going door to door selling vacuums to pay for my Olympic dream. I’d probably be still doing that now if I wasn’t here.”

He loved skeleton but knew it was not cheap. “And no one wanted to sponsor me, nobody believed I could do this. Everyone thought I was crazy but I proved to the world I wanted to do this and sponsors came on board. Now I am getting so emotional.”

At this point Frimpong cried. Later, he was hugged by his wife and their nine-month-old daughter Ashanti, along with Watson, who has become a good friend since they met in September 2017 with the crazy plan to both make it to South Korea.

“Since then we have been rooming together to keep costs low,” Frimpong said. “I always yell for him on the start. We want to get the best out of ourselves and also get a bit of diversity in the sport, inspire people in our country.”

When he competes he wears a helmet bearing an image of a rabbit escaping from a lion’s mouth – something that seems appropriate given his journey. “We know we are here on the bottom of the list and that is okay,” Frimpong said. “The best guys have been doing it 12-plus years. This thing is bigger than ourselves.”

Watson has an amazing tale of his own – having turned down a role in The Lion King last summer to train for what looked like an unlikely ambition of competing in the Winter Olympics. It looked like a disastrous decision, until a few athletes dropped out late on. “Maybe you’ll see me holding a Tony 10 years from now, I don’t know,” he said, laughing.

Watson also plays eight instruments, including the ukelele, and has an album on iTunes called Dreaming Wide Awake, which rather sums up his life philosophy.

He laughed too, when asked whether he had heard from Jamaica’s most famous athlete, Usain Bolt, the triple Olympic 100m and 200m champion. “No calls, no texts, not even a shoutout on Twitter,” he said, jokingly. “But I know there will be a lot of Jamaicans including him who are watching and cheering and that means a lot to me.”

Every Olympic Games has its unlikely heroes, athletes who are catapulted into international stardom like Eddie “the Eagle” Edwards and the 1988 Jamaican bobsleigh team, but Frimpong and Watson insist they have greater goals than being one-day internet sensations. Their plan is to return to the Winter Olympics in 2022, when they hope to have the experience to be far more competitive – and to also inspire more people.

“For me, being at the Winter Olympics is about breaking barriers,” Frimpong said, “to show black people, people from warm countries, can do this as well. Second, I want to motivate and inspire people in my country, to show kids in a little corner what they can do. That little kid was just like myself, living with 10 other kids in a 4x5m room that would never see snow before.

“Look at the world championships a year ago, I was terrible,” he said, laughing, “but I am improving and that is what sport is about”.

And he was just as self-deprecating when he was asked by one wag whether he would be pleading with Team GB to borrow one of their skinsuits. “You have to stop hitting walls first before you can go fast,” he sighed, “but I don’t mind. I want to show dreams can come true if you are resilient and work hard.”