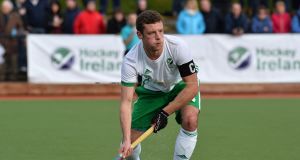 Jonathan Bell: he is one of four ’Garvey players travelling to Malaysia. Photograph: Rowland White/Inpho

With many postponed matches last weekend due to the freezing weather, crusty Glenanne held on to their ever more important lead with just six games remaining in the home and away format of the EY Irish Hockey League.

They will be pleased with last weekend’s win and draw which leaves them seven points ahead of Three Rock Rovers, who disappointingly could squeeze just a 1-1 draw out of Ulster side Annadale on a snowy pitch in Grange Road.

Glenanne are in a better place than their rivals, and although Lisnagarvey have three matches in hand the Dublin side are hardly going to feel threatened with their table-topping 30 points in the bag.

That will become more relevant later this month and into March when Craig Fulton takes his Irish team to play in the Sultan Azlan Shah Cup in Malaysia, where four ’Garvey players – Jonny Bell, Paul Gleghorne, Michael Robson and Sean Murray – will be deployed.

Glenanne will have two travelling, Sam O’Connor and Shane O’Donoghue.

‘Garvey are on 19 points from nine games, and can look forward to a few double weekends, not ideal when chasing the leading teams.

Their game with Banbridge last Friday, an evening start in Havelock Park, was, given the weather conditions last weekend, odds on to be postponed and it was.

Monkstown, who take the short trip to Pembroke this weekend, are in danger of playing themselves out of the play-offs after last week’s thumping by ’Garvey.

’Garvey meet Banbridge on Saturday in Hillsborough, with Glenanne travelling to Cookstown. Three Rock Rovers have no league fixture.

Coming down towards the end game, there are must wins for ’Garvey, Monkstown and Pembroke if they want to be in the mix at the end of the season for next season’s European prizes.