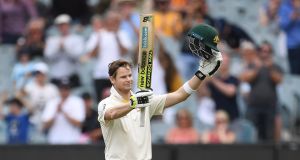 There was still no way past Steve Smith. The pitch may have been as docile as a lamb yet it still required wonderful concentration from Australia’s phenomenal captain to bat for almost seven hours to save the Melbourne Test match. In the process he recorded his 23rd Test century. Finding the key to removing Smith from the crease would have taxed the team at Bletchley Park, let alone the one led by Joe Root.

Here Smith played with his usual fidgeting calm, as resolute in saving the game as he was when winning those in Brisbane and Perth. He now revels in self-denial as well as shredding opposition attacks. At the crease he is vaguely reminiscent of Derek Randall, who played his greatest innings here 40 years ago (there has been some footage of the Centenary Test on our screens during the rain breaks). Like Randall there is much pre-delivery movement and a self-taught, idiosyncratic method – though Smith has proven to be a far more prolific and significant batsman. He has the confidence to do it his way.

Randall once told me that his Centenary Test innings of 174 was not his favourite knock. Instead he chose his 150 in Sydney in 1978 when he batted for almost 10 hours to overturn England’s first innings deficit of 142. Randall relished that innings because it was out of character. In this series Smith has demonstrated that he can peel off hundreds of different hues depending on the needs of his team. He can enjoy a 259-ball 100 in Melbourne as much as a fast-flowing 138-ball one in Perth. At the moment Smith is simply and serenely the best whatever the circumstances.

There were brief moments just before lunch on the final day when the prospect of him running out of partners as England forged on to a remarkable victory was not impossible. Australia lost David Warner and Shaun Marsh in the space of six overs and maybe England scented a chance.

For the most of the morning there had been no problems for Australia’s two great batsmen even though they were contained by an England attack that never faltered in its resolve to deny their opponents easy runs. Root shuffled his bowlers and eventually tossed the ball to himself. By now Warner was on 86, eyeing his second hundred of the match and a special landmark. Warner, like Ricky Ponting and Sunil Gavaskar before him, had hit two hundreds in a Test match three times. A record-breaking fourth was on the horizon when he received his first ball from Root. After five hours of rigid self-discipline Warner had a horrible heave, which coincided with the ball gripping on the solitary blemish on the surface, and James Vince calmly caught the ensuing skier.

Stuart Broad was recalled and just before the interval he found the edge of Shaun Marsh’s bat. Jonny Bairstow, standing very close because of the moribund nature of the pitch, dived to his left, holding a fine one-handed catch. So at lunch there must have been some nerves in the home dressing room since Australia were effectively 14 for four.

After the break Mitchell Marsh, yet to get off the mark, sliced a drive inches short of Vince at backward point. Otherwise the younger Marsh, who had battered the England bowlers in Perth, defended stoutly in an innings that will have impressed his coach, captain and selectors as much as his blazing 181 just over a week ago. He crawled along but with Smith still at the other end this suited the Australians fine. Smith himself pottered along happily to his century and then the captains shook hands at the earliest opportunity.

It was a forgettable Test match except for Alastair Cook’s unbeaten 244, which, to his great chagrin, could not change the course of the series though it might change the course of his career. The vultures were circling but they have now been dispersed. He can still bat, but like many players late in their career, a pattern is emerging: there is a tendency to fail more often but once established he knows how to deliver a truly monumental innings. Consistency is harder to find.

The match was ruined by a sub-standard pitch. This was akin to asking the best Australian Rules footballers to play on a ploughed field, something the authorities here would never tolerate. As a result the spectacle of one of the great sporting occasions was sadly diminished. This drop-in surface refused to deteriorate as good cricket pitch should and it was not the first time that the MCG has produced a track that is more likely to alienate cricket fans than attract them. It would have been adequate for a Big Bash match. In the spirit of cooperation I have a suggestion: move the Boxing Day Test to Hobart until a solution is found.

England can, at least, travel to Sydney with their heads held high, which was more than they could do in 2006 or 2013. They strained every sinew in the field at the MCG but they cannot find the magic formula that disposes of Smith. Australia have added Ashton Agar, the left-arm spinner from WA, to their squad for the final Test and there is a good chance that he will play. The SCG does not encourage spinners as it did several decades ago but there is reckoned to be more assistance for the tweakers than when England last played there. That was not their finest hour. Scott Borthwick was England’s solitary spinner in his only Test and England contrived to lose their 20 wickets in 90 overs. The Test specialists had an embarrassing two days to spend in Sydney before their flights home.

This time there is more resolve within the England camp and they won’t be introducing as many debutants in Sydney (in 2014 Borthwick received his first cap along with Gary Ballance and Boyd Rankin when there was barely a wheel left on the wagon). But there is the possibility that they might introduce Mason Crane, who played his one game for New South Wales there last season. Crane would replace Tom Curran or, rather sadly, Moeen Ali, who has never yet been dropped in his career of 48 Test matches.