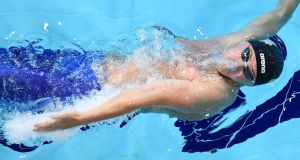 Ireland’s Shane Ryan has qualified for the final of the men’s 50m backstroke at the European Championships in Glasgow, with teenager Conor Ferguson agonisingly missing out by a couple of hundredths of a second

Longford’s Darragh Greene missed out on a place in the 100m breaststroke final, losing a dramatic semi-final swim-off to Russia’s Kirill Prigoda after both swimmers came home in 59.92 in the second semi-final to tie for the eighth and final spot.

Greene became the first Irish swimmer to break the one minute mark in the semi-final but could not manage to reel in his opponent in the swim-off after Prigoda flew off the blocks for the first 50 metres.

Darragh Greene just misses out on a place in the 100m breaststroke final after a swim-off with Russia's Kirill Prigoda. #EuropeanChampionships pic.twitter.com/K7LqmOiBR7

The Irish swimmer pulled back some of the advantage after the turn but the Russian pulled away again in the last 20 metres, touching the all first in a time of 59.39, with Greene coming home in 60.44. Greene will be reserve for Saturday’s final.

After smashing his Irish record in the morning heats, where his time of 23.32 knocked four-tenths off his old mark, Ryan came second in the second semi-final of the 50m backstroke in a time of 24.57 to qualify automatically for Saturday’s final (6.18pm).

Having lowered his own Irish junior record in the morning, 18-year-old Ferguson dipped under 25 second for the first time, finishing in 24.99 to finish fifth in the first semi-final.

It left him the ninth fastest overall, with Greece’s Apostolos Christou’s finishing fourth in Ryan’s semi-final in a time of 24.96. Ferguson will remain on standby as a reserve for the final.

Ireland’s 4x100m freestyle relay team of Ryan, David Thompson, Jordan Sloan and Robbie Powell completed the morning with a third Irish senior record. The quartet took almost two seconds off the 2017 record (3:19.39) with Powell taking them home in 3:17.55 to finish fourth in their heat and 12th overall.