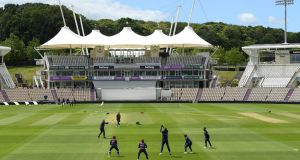 West Indies players during a net session at the Ageas Bowl in Southampton on Monday. Photograph: Stu Forster/Getty Images for ECB

England will host Ireland in a three-match one-day international series starting on Thursday, July 30th, the England & Wales Cricket Board announced on Monday.

The Ireland squad will arrive in England on a charter flight on July 18th and set up their base at the Ageas Bowl in Southampton, before facing world champions England in three ODIs at the same venue behind closed doors.

The Ireland players and support staff will be tested a week before departure, on arrival and regularly during their stay. This testing complements the current regime already in place since the squad resumed training three weeks ago.

All three games will be day/night affairs, starting at 2pm, with the second and third ODIs between the two sides taking place on Saturday, August 1st and Tuesday, August 4th respectively. All games will be broadcast on Sky Sports Cricket.

The games were originally scheduled for September and will form part of the new World Cup Super League – the qualification process for the 2023 ICC World Cup.

Reacting to the confirmation of the fixtures, Ireland captain Andrew Balbirnie said: “It’s a great relief to the squad and coaching staff that the games are able to proceed, and despite the challenges over the last four months, the lads are in good shape and good spirits.

“Returning to training was a great first step in the return to cricket, and we have all enjoyed getting back into the nets to brush out the cobwebs.

“However, playing international cricket is a huge honour – and not only do we have that to look forward to now, but we’ll be taking on the world champions in their own backyard. That is the ultimate challenge – and we’ll be ready.”