The Ashes: What is it? When does it start? Who’s going to win? 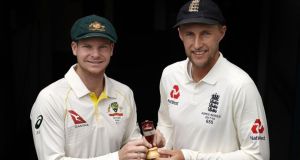 The Ashes is five-Test series between England and Australia, which takes place roughly every two years. This winter, Australia are hosts - before the next one is held in England during the summer of 2019.

The series gets underway in Brisbane on Thursday November 23rd, with the final Test in Sydney starting on January 4th 2018.

The five matches will be held across five venues - starting at the Gabba in Brisbane, before a first ever day/night Ashes Test at the Adelaide Oval, which hosted Ireland’s recent opening International Rules defeat to Australia. The show moves on to the WACA in Perth, followed by the Boxing (Stephen’s) Day Test at the Melbourne Cricket Ground (MCG), before the series conclusion in Sydney, at the SCG.

The 11cm small Urn, handed to England captain Evo Bligh during the first Ashes series in 1882/83, resides permanently in the MCC’s cricket museum at Lord’s. Since 1998/99 the two sides have played for a Waterford crystal replica.

There have been 69 Ashes series since its inception in 1882 and the two sides are remarkably level overall, with 32 victories apiece and five draws.

The opening Test match in Brisbane gets underway at midnight Irish time, while the day night Test in Adelaide starts at 3.30am. The Perth Test has a 2.30am start, with 11.30pm starts in Melbourne and Sydney. With a day’s play lasting between seven and eight hours, viewing will require a late night or an early start.

BT Sport have the rights ahead of Sky for this winter’s series, and will be showing every day’s play.

Where can I listen?

Test Match Special will be covering the series on BBC Radio 4, available on 198 LW.

The weather is forecast for 26 degrees for Thursday’s opener in Brisbane – a mild start to the winter.

Australia are heavy favourites, especially in the absence of England’s key player, Ben Stokes, who is under police investigation for causing actual bodily harm on a night out in Bristol. The two captains, Joe Root and Steve Smith, are ranked the number one and two batsmen in the world. The Australian pace attack of Mitchell Starc, Josh Hazelwood and Pat Cummins is expected to be the difference between the teams.