Insults, vultures and blistering heat: The Ashes at the Gabba 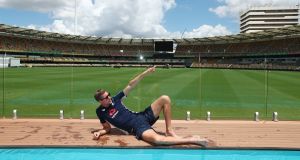 As England’s plane touched down in Brisbane on Sunday the Australia coach, Darren Lehmann, said: “We love playing here.” It is easy to see why, because Australians love winning and at the Gabba they almost always win. England last left victorious in 1986, and Australia lost against West Indies in 1988 but have not been defeated at the Gabba since. Just seven of those 29 Tests have been drawn, two of them by England.

The “Gabbatoir” is a fortress and England’s recent visits – with the exception, like almost everything regarding away Ashes series this century, of 2010-11 – hold horrific memories, from Nasser Hussain’s call to Simon Jones’s injury, to Mitchell Johnson’s resurgence and Steve Harmison’s wide. The sense is that if England can fly to Adelaide level-pegging then they have a chance this series. Get blown away – as Mitchell Starc and Pat Cummins could do, and Johnson did – and the road back is long, hot and utterly inhospitable.

England’s arrival this time did not run quite as expected. It was drizzling, and cold. England emerged from an arrivals gate 100 yards from the one by which the throng – perhaps an overstatement – of fans and media were assembled. Jonny Bairstow, put up to answer questions, expressed a touch of surprise at how few press were stood before him. Nothing about it was desperately theatrical or, indeed, imposing. That will change come Thursday, and so will Bairstow’s description of the mood in the touring camp: “Content. Relaxed. Excited.”

The myriad backroom staff truly are miracle workers if England remain “relaxed” on the morning of the game. Only a quarter of the 16 tourists – the captain and the three wise old dukes – have played a Test at the Gabba, and just two more – Bairstow and Gary Ballance – have been in the squad for a match there. It was fine thinking from the management to grant England Lions, who are in town (and have been rejoined by George Garton), a day off on Thursday, so they can experience the feel of the fixture. Next time, boys. The atmosphere four years ago, Bairstow recalls, was “unforgettable”.

Jason Gillespie spins a good yarn about his contrasting experiences of the Gabba’s atmosphere. In March 1995, a month shy of his 20th birthday, he played for South Australia in the Sheffield Shield final against Queensland. The home side won their first Shield title (sparking a run of seven in 17 years), and South Australia were barracked off the pitch. “It was quite an eye-opener for a young bloke,” Gillespie recalls. “There was a big crowd for a Shield game and we were called everything under the sun. It was the worst stuff you could imagine – derogatory, abusive, and pretty aggressive.”

It was November 2001 before Gillespie played the first of his four Tests at the ground, against New Zealand. “I couldn’t have been made to feel more welcome,” he said. “They loved us, and it was totally the opposite of what I’d known before. There seemed to be no recollection of the things that had been said. You’d certainly rather be on their side. The support was amazing and they have a great sense of humour.”

Jonathan Trott might disagree. He had greater worries in 2013, but memorably recalls the chant “Trott, Trott, Trott, your mum’s got vaginal rot” ringing out. The Gabba is a big bowl, another homogenous stadium, now (that certainly was not always the case; once there was a hill and a track for racing dogs), and the sound hangs in the air like few other places. The sound is usually the best part of 42,000 Queenslanders (the first three days are sold out) not just saying, but screaming, what they are thinking.

The Queensland crowd – Australia’s most parochial, possessing a fierce sense of rough-and-ready regional identity – is just one reason Gillespie reckons Australia are so successful there. Normally, it is stinking hot (although this week threatens to be damp). So often it comes first in the summer’s calendar (this is the ninth successive Ashes series in Australia the ground has opened), meaning touring sides can be caught cold, or flustered by the bluster and the hype. The dressing rooms are underground, with a viewing area for the players to watch the game meaning that, simultaneously, fans can watch them. There’s no hiding.

Brisbane’s Courier-Mail – whose tricks on this trip, having lost a couple of their notable attack dogs, will be interesting – are as into it as the crowd. And the pitch, considered by many the best wicket in the world, is distinct, and suits Australians perfectly. It is quick, bouncy, true and, importantly, is a permanent fixture. So many other Australian grounds have had their identities eroded by samey drop-ins.

This week’s is of interest because it is the last prepared by the curator Kevin Mitchell Jr after 27 years in the job (before that he did six years as assistant curator, working under his father, another Kevin). Groundsmen are a serious business in Australia, which is why they have a highfalutin name like “curator”. They sometimes give press conferences, and their work is respected and reported closely. Mitchell will want to leave the family business with a bang. He will also want to keep up his remarkable unbeaten record, and make it three decades of Australian dominance.

Here, then, we see England entering the most hostile of cricket grounds. Even one of the ends, Vulture Street, has a name that hints at a painful death. England arrive chipper, cheerful and champing at the bit but having met nothing on tour that even remotely resembles what lies in wait. Their optimism and unity is encouraging, but it is about to undergo a very serious test. – Guardian service