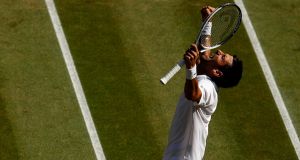 An eerie murmuring of the crowd took grip quite quickly in the men’s Wimbledon final. It’s what happens on Centre Court when the energy of optimism and possibility is sucked away, when hope is all but suffocated in the first game.

This year’s Wimbledon will be forever remembered for the shadow cast on the final by the semi-final, a hothouse boom bonanza between Kevin Anderson and John Isner that lasted six hours and 36 minutes, the second longest match ever played at Wimbledon.

It undoubtedly hurt Anderson’s chances of winning a first Wimbledon title. He had to consult with a podiatrist for his feet and was uncertain of how his body would react in the final, especially if the match extended out to four or five hours.

It was he said time for Wimbledon to change the rules and bring in a tiebreak in the fifth set or face more 50 game fifth sets and finalists barely fit for purpose.

“Most people I speak to I feel really find value if there was a fifth-set breaker like there is at the US Open,” said Anderson. “It’s really exciting. If a winner hasn’t been decided at 6-all in the fifth, I don’t think there’s a reason to continue playing. I think a tiebreaker would be fine. That would be my reasoning.”

But Novak Djokovic will take his 6-2, 6-2, 7-6(3) win over Anderson after two years in which time it was questioned whether he would ever return to the top of the sport after injury and scrutiny of his private life.

“I had many moments of doubt, I didn’t know if could come back to this level to compete,” said Djokovic afterwards.

“There is no better place to make a comeback, it’s a sacred place for world of tennis, it’s very special.”

In all it took two hours and 19 minutes, a sprint to the finish line by Djokovic slowed down at the end by a last stand third set and tiebreak.

Anderson almost succeeded in extending it to a fourth set, the wonder being how he would have physically managed that. He stepped on to the court to face Djokovic having already spent 21 hours and one minute getting there, five and a half hours longer than the Serb.

The right-handed South African was the underdog regardless but having survived going two sets down and match point to Roger Federer as well as his Isner epic, he had perhaps rode his luck coming to the end of a sometimes bewildering week.

But Djokovic, now a 13 times Grand Slam champion, was again silken in movement and without demons on his shoulder.

With wonderful speed and elasticity, he read the 130 mph plus serves and ghosting in to position picked them off on both sides.

Free of injury, the 31-year-old took charge of the match in the first game and never looked back, charging through the sets with surety and panache.

Djokovic disdainfully broke the Anderson serve, his biggest weapon, in the opening nervous game. The 32-year-old double faulted, first going long and then into the tape for 0-1. Another service break in the fifth game for 4-1 and the set was bolted. It took 29 minutes.

In the second set Djokovic again opened with threatening confidence and broke his opponent in the first game for 0-1. The fans could already hear the distant creaking as Anderson’s courageous 6ft8in frame began to topple. A second break for 4-1 and the set tumbled towards Djokovic serving out for 6-2 and a 2-0 lead. By then the big server had hit just three aces.

His Grand Slam dreams were dying before his eyes. Then as if the two meek sets offered some kind of shock therapy, Anderson fist pumped and successfully energised his game in the third set.

Less cautious than Djokovic and his serves now singing he forced four set points at 6-5 much to the delight of the crowd and almost succeeded in sending the final into a fourth set.

Djokovic, who hadn’t won a Grand Slam since defeating Andy Murray in the 2016 Roland Garros final, dug in and weathered the thunder and court side temperatures of over 40 degrees to force a tiebreak.

But Anderson’s race was run. In the tiebreak his levels marginally dipped. That was enough of an invitation. Djokovic sped to a 5-1 lead, then gathered another point for 6-2. From having had to rescue his serve and fend off a fourth set just minutes before he had four championship points.

Anderson saved the first but his return on the Djokovic serve was unconvincing and found the middle of the net, his week finally closing. It seemed almost like merciful release.

And Djokovic, earning his fourth Wimbledon title and first Grand Slam for two years began another lease of life.

“It’s easy to talk now, I had to really trust the process, I had to trust in myself,” said the Wimbledon champion.

“It was a long journey, especially considering that elbow injury that took me out from the tour for six months. When I started training again, came back on the tour, played Australia, but I played with the pain.

“I did not expect to be back in the top shape already here in Wimbledon so quickly. If you asked me after Roland Garros, I would probably maybe doubt that.”