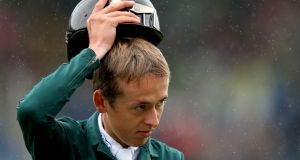 Ireland’s Bertram Allen was crowned leading rider at the five-star show in Bordeaux following his second-place finish in the €155,000 Land Rover Grand Prix on Sunday afternoon.

Thirty-two combinations started in the 1.60m class over a course designed by Italy’s Uliano Vezzani with seven qualifying for the second round, six of whom recorded a double clear.

Wexford native Allen was last to take on the shortened track with Ballywalter Farms’ Izzy By Picobello but his clear in 36.38 wasn’t fast enough to knock Belgium’s Pieter Devos with Apart (35.49) from the top spot. Germany’s Ludger Beerbaum finished third on Chaman (36.46) with the host nation’s Penelope Leprevost fourth on Ratina d’la Rousserie (38.03).

On Saturday night at the French venue, Tipperary-born Denis Lynch and All Star 5 finished fourth in the Longines World Cup jumping series 1.60m jump-off class where 19 combinations progressed to the second round. The Irish pairing recorded a double clear in 38.41 with the honours going to France’s Julien Epaillard on Quatrin de la Roque (35.92).

On 58 points following this 12th leg of the 13-round Western European League of the series, Lynch lies in third place behind French rider Kevin Staut (78) and Lorenzo de Luca of Italy (67). The League ends at Gothenburg later this month with the final taking place in Omaha, Nebraska in March.

Across the Atlantic, Keving Babington fared best of the Irish when fifth in Sunday’s $216,000 Ariat Grand Prix as week four of the Winter Equestrian Festival concluded in Wellington, Florida. Picking up four faults in round one with Debra Wycoff’s Super Chilled (77.98), Babington finished behind the USA’s Kent Farrington who also rolled a pole with Gazelle (76.58).

Just three riders made it through to the jump-off where the USA’s Todd Minikus recorded the fastest double clear on Babalou 41 (38.796) ahead of Spain’s Sergio Alvarez Moya riding G&C Unicstar d’Laumone (40.302). Also representing the USA, young rider Jennifer Gates (21) picked up two time faults to finish third on Pumped Up Kicks (51.286).

There were no Irish competitors in the $100,000 Land Rover Eventing Showcase held over the weekend at Wellington but the winning rider, the USA’s Boyd Martin who brought up a hat trick in the class, was mounted on the Irish Sport Horse mare Welcome Shadow.

The 12-year-old grey, a daughter of the Irish Draught stallion Welcome Flagmount, was bred in Co Galway by James Keville out of the thoroughbred mare She’s Bizarre (by Good Thyne) who failed to complete in four outings in point-to-points. Welcome Shadow was originally sold into the United States as a hunter for Craig Callen who owns the mare in partnership with his wife Gloria.

Martin’s compatriot Marilyn Little topped the rankings after dressage and show jumping with RF Scandalous but had to withdraw the leader when taking a fall on the cross-country phase with her other mount, RF Demeter.