Ian O'Riordan: The madness of the long distance runner

Ron Hill clocked up over 150,000 miles, the equivalent of running six times around the world 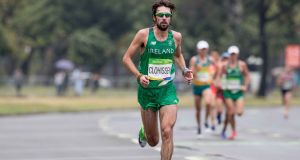 Mick Clohisey in the marathon in Rio. “I’ve seen some pictures of myself in Rio, and can’t believe how bad I look.” Photograph: INPHO/Morgan Treacy

“People think we’re mad, but this is our golf,” which, according to Fergal Somerville, is the reason why he and 15 other hardy souls are spending Saturday morning in the officially freezing waters of Lough Dan in the Wicklow Mountains to claim that world-unrenowned title of International Ice Mile Swimmer.

There is a grave danger of hypothermia – if they don’t die of a heart attack first – and it’s not even a race. Most of them couldn’t care less whether they make it home in time for the rugby.

Daniel Day-Lewis once told me the reason he loves living in Ireland is because whenever people describe him as mad they mean it as a compliment. It’s probably why whenever we describe ourselves as a sports-mad nation we mean that in a good way. Except that everyone has their own definition of madness.

Rowing solo across the Atlantic for no other reason than satisfying your wandering desires could be considered insane, although Gavan Hennigan’s effort is being hailed by those in the know as a stroke of pure genius. Indeed, as Aristotle quoted Plato, “no excellent mind is without a tinge of madness”.

It took the 35-year-old from Galway a mere 49 days, 11 hours and 37 minutes, crossing from the Canaries to arrive in Antigua on Wednesday night, and although that was a race Hennigan’s prime motivation was “to live life” – so much so that he ha’s threatening to row back home as a sort of lap of honour. Madness, indeed.

Despite it now becoming a sort of modern opium for people, the long distance runner, who often sets out for no other reason than sheer pleasure of it, still gets the mad rap, probably not helped by people like Ron Hill.

Last Sunday morning Hill looked at the pair of running shoes lying outside the back door at his home in Hyde near Manchester and decided “no more”.

So, for the first time in over half a century, he took a day off – as in no running whatsoever. So ended the longest consecutive daily-running streak known to mankind. Or at least since our wiry old hunter-gatherer ancestors.

Hill, a three-time Olympian and European marathon champion, has been recording his daily runs since December 20th, 1964, and had not missed a day in the over 52 years since – 19,032 days to be exact.

It is, of course, a record built on good faith, although according to the US Running Streak Association who somehow keep tabs on this, to qualify a run must be “at least one continuous mile within each calendar day under one’s own body power”.

Illness and injury had threatened Hill’s streak in the past yet still he kept going, clocking up over 150,000 miles – the equivalent of running six times around the world.

Pain in his heart

Still, this doesn’t begin to answer the question of why we run. I was thinking about this after running into Mick Clohisey on Grand Canal Quay last week – six months after the Rio Olympics where Clohisey had run himself to an absolute standstill to finish 103rd in the marathon, his 2:26:34 over 11 minutes outside his best.

After going to considerable lengths to qualify (twice running inside the standard, with a best of 2:15:10), his Olympic dream turned into a nightmare – an infected blister first undoing some critical training, before a virus left him looking and feeling like a pale shadow of himself.

“I’ve seen some pictures of myself in Rio, and can’t believe how bad I look,” he says, and some people reckon Clohisey was mad to finish. “Obviously the plan was to perform to the best of my ability, but that didn’t happen. But ‘you finish, always’, as my coach Dick Hooper tells me. I’d a lot of family and friends there, and it was important to get through it.”

“Maybe I didn’t hype up the Olympics as much as some other people do, but I always knew there is more to running. I’ve moved on, to be honest. It still means a lot to have competed in Rio, but I’m running the London Marathon in April, hopefully the World Championships there this summer as well.

“I’m holding up okay, still enjoy running, definitely feel I’ve more to give, and would like to show that.”

Starting with the European Club Cross-Country with Raheny Shamrocks in Albufeira, Portugal, on Sunday, their prize for winning a first Irish men’s team cross-country title last November. It’s mad, but Clohisey sounds more excited about that than he did Rio. Except that everyone has their own definition of madness.