Top three all win to strengthen their Hockey League positions

Hermes-Monkstown, UCD and Cork Harlequins all won on Saturday and stay on track for Champions Trophy qualification 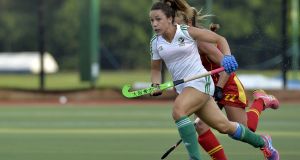 Anna O’Flanagan: the Irish international getting her fifth hat-trick of the campaign against Ards, bringing her tally to 20 in 11 games. Photograph: Inpho

The top three in the EY Hockey League put a little more daylight between themselves and the chasing pack on Saturday by all picking up wins. Leaders Hermes-Monkstown eased to a 4-0 victory over Ards, but UCD and Cork Harlequins had a tougher time of it, a single goal deciding their ties against Loreto and Ulster Elks, respectively.

Hermes’ Anna O’Flanagan has now scored more goals than five of the 10 teams in the league, the Irish international getting her fifth hat-trick of the campaign against Ards, bringing her tally to 20 in 11 games.

The most valuable score of the weekend was, arguably, the one produced by Orla Patton that gave second-placed UCD the points against an in-form Loreto at Beaufort, the game scoreless until the final quarter when Patton converted a penalty corner. Loreto hold on to fourth, which would be enough to qualify for the Champions Trophy should a top three finisher win the Irish Senior Cup, but are now four points behind Harlequins.

After taking the lead through Michelle Barry 16 minutes in to their home game against bottom club Ulster Elks, who had conceded 37 goals in 10 games before Saturday, Harlequins might have expected the floodgates to spring open, but it proved to be the only score of the game, Elks goalkeeper Chrissie McKee denying them on several occasions.

Pegasus, meanwhile, had their ambitions dented by Pembroke Wanderers at Serpentine Avenue where they had to come from behind to draw after Jilly Ringwood had given the home side a fifth minute lead. Michelle Harvey finally got the equaliser from a penalty corner in the third quarter, but the Belfast side failed to capitalise on a corner count that ran in to double figures. Railway Union moved above Pegasus in to fifth with Saturday’s biggest win, Kate Dillon scoring twice in a 6-0 victory away to Belfast Harlequins.