Tri-Nations Tournament, Spain: Higher-ranked hosts were pushed to claw their way back into the game 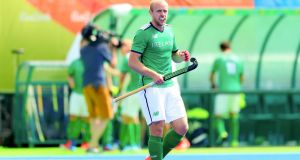 Ireland finished the Tri-Nations tournament with a creditable draw against the hosts. The opening 10 minutes of the tie saw Ireland create more chances than their hosts as Neal Glassey drew an early save from Mario Fernandez while Shane O’Donoghue’s penalty corner drag forced another fine save.

The ever-reliable Eugene Magee was the instigator that set up the opening goal, calmly deflected in by Matthew Nelson for his first senior international goal. Ireland was denied their second goal from a well worked penalty corner when the ball was cleared off the line by the post man.

The game settled down for the remainder of the half until the final five minutes when Ricardo Santana drew the game level for Spain, but minutes later Nelson got his second goal as he was quickest to a loose ball in the circle.

It wasn’t long into the second half before Ireland furthered their lead. Johnny McKee won Ireland a penalty corner and O’Donoghue made no mistake the second time of asking as he drag flicked the ball high into the goal.

Higher-ranked Spain pushed to claw their way back into the game but excellent penalty corner running by Jeremy Duncan closed down an early chance of the third quarter. In the final minute of the third quarter the momentum began to shift as Xavi Lleonart scored from a penalty corner and moments into the final quarter he got his second goal to draw Spain level at 3-3. Both sides pushed for a winning goal but the final result remained at 3-3.

Speaking about the series head coach Craig Fulton said “There have been improvements in every game and that was the main objective coming to Spain with this squad. We have made some really good progress as a team and there were some strong performances from the younger players”.