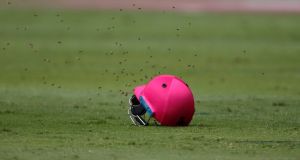 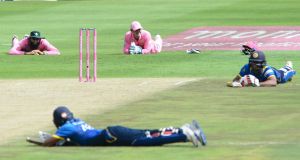 South Africa’s ‘pink’ one-day international against Sri Lanka encountered an unexpected hazard when a swarm of bees interrupted play for almost half an hour at the Wanderers.

The hosts, who took the field wearing the pink strip used annually in aid of charitable causes, were held up three times in all when the bees flew into Johannesburg.

Players on both teams fell to the floor in evasive action during Sri Lanka’s innings, but when the swarm moved in for a third time and showed no sign of a quick exit, officials decided it was time to call for the experts.

Attempts to attract them away from the playing area with a bucket of soft drink did not do the trick.

A professional beekeeper was therefore summoned next, armed with some honey, and play was eventually able to resume – although the 27th over of the match, bowled by Chris Morris, lasted half an hour in all.

It was subsequently announced there would be no reduction in overs in this third ODI as South Africa seek a victory that would wrap up the five-match series 3-0.