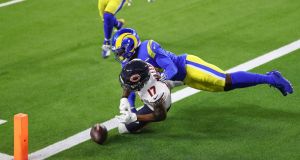 The Los Angeles Rams prevailed in a battle of formidable defences to beat the Chicago Bears 24-10 in the NFL on Monday night.

Former Bear Leonard Floyd played an inspired game against his old team, ending with two sacks and taking the game ball as the Rams ground out an affirming win over their fellow National Football Conference contenders.

LA got out to a 7-0 lead at quarter-time after Jared Goff found Josh Reynolds with a four-yard pass for a touch-down late in the quarter.

It was 10-3 at half-time before the Rams asserted their superiority with two touch-downs in the third term, with Malcolm Brown rushing over from close range before Gerald Everett took a 12-yard pass from Goff to score after an eight-play 80-yard drive.

Chicago gained a consolation touchdown with seven minutes left when Eddie Jackson scored from eight yards off a fumble return.

The result left both teams with 5-2 win-loss records, with Los Angeles sitting third in the NFC West and Chicago second in the NFC North.

Goff passed for 219 yards, while the Bears were held to just 182 yards through the first three quarters.

The three-time Pro Bowler went down in the first quarter after attempting to tackle Bengals cornerback Darius Phillips, who had intercepted a deep throw by Cleveland quarterback Baker Mayfield. He was clutching his left knee while lying on the ground after the play.

Beckham, who was diagnosed with a torn ACL (anterior cruciate ligament), was the latest high-profile NFL player to suffer a major injury this season, after the league was forced adjust its preseason camps and do away with preseason games due to the coronavirus pandemic.

Dallas Cowboys starting quarterback Dak Prescott suffered a season-ending compound ankle fracture and dislocation earlier this month. On Sunday his backup, veteran Andy Dalton, was carted off the field with a head injury following a violent hit from Washington linebacker Jon Bostic that temporarily rendered the quarterback motionless on the field.

Bostic was ejected from the game. The Cowboys said on Monday that Dalton had suffered a concussion.

Elsewhere on Sunday, Arizona Cardinals linebacker Isaiah Irving left the field on a stretcher after sustaining a neck injury on a block during a kick-off in his team’s 37-34 overtime win over the Seattle Seahawks, and teammate Kenyan Drake left with an ankle injury.