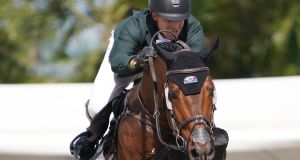 Cork’s Shane Sweetnam finished second in Sunday’s featured class at the Palm Beach Equestrian Centre in Wellington, Florida, the $214,000 four-star Grand Prix, which rounded off week eight of 12 of the Winter Equestrian Festival.

Fifty combinations started over a 1.60m track designed by the USA’s Ken Krome with eight going clear in the first round to advance to the jump-off. Sligo’s Darragh Kerins was among that number but he had a fence down against the clock in 40.71 seconds to finish seventh on NRG Farm’s Catoki’s Son Z.

Sweetnam, who is based in Florida, went double clear in 38.29 with Spy Coast Farm’s 14-year-old Zangersheide stallion Chaqui Z but was beaten by the last-to-go, Mexico’s Rodrigo Lambre, who left all the fences intact on Catover in 37.73. Britain’s Alexandra Thornton finished third with Charielle (39.08).

“I was delighted with him,” said Sweetnam of Chaqui Z. “This is only his first time that he’s shown here this year and it’s only his first real big class. He felt great and I think his jump-off was excellent. Even though he’s 14, he feels like he’s eight. So, I’m really happy with where he is at the moment.”

Two special awards were presented during the final day of week eight. First, the Niall Grimes perpetual trophy was presented by Equestrian Sport Productions president (and Dublin native) Michael Stone, to Shane Sweetnam for the third consecutive year as the leading Irish rider during the CSIO week.

Traditionally given to an international equestrian competing in the CSIO at WEF, the Kate Nash Boone Style Award was presented to Ireland’s Kevin Babington for 2020. A shift in the award’s honour, Michael Meller gave it in recognition of Babington’s determination, inspiration, and dedication to show jumping after a life-changing event re-focused his role in the sport last year.

There was more good news on the international dressage front for Ireland on Sunday as Co Kildare’s Heike Holstein finished sixth in the four-star Grand Prix freestyle to music at Lier in Belgium.

Riding the home-bred mare Sambuca, an 11-year-old by Samarant, three-time Olympian Holstein scored 73.795 per cent which was just over one percentage point off her best score on Sambuca of 74.915. Victory in Sunday’s competition went to Dutch rider Marlies van Baalen on Ben Johnson (78.155).