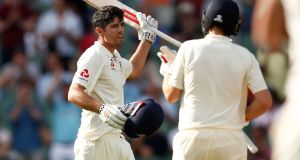 Alastair Cook of England is congratulated by Joe Root as he celebrates reaching his century. Photograph: Scott Barbour/Getty Images

This was how it was supposed to be from the start with the senior citizens showing the way. Sadly it took until the second day of the Melbourne Test for all of them to function simultaneously. Still here was confirmation that the likes of Stuart Broad, Jimmy Anderson and Alastair Cook are not suddenly as useless as their many and various critics had decided. Especially Cook, who accepted the gifts offered by Steve Smith in the final over of the day, to race to a memorable hundred in 164 balls.

Having watched England’s bowlers dispatch the Australians with surprising alacrity from first slip, Cook set to work half an hour after lunch. Actually it did not look like work for Cook. He seemed to be having fun. On a pitch that has somehow neutered the majority of batsmen, he batted as fluently as he has ever done in an England shirt in pursuit of Australia’s modest first innings total of 327.

He breezed along to his fifth hundred in Australia – he is the only Englishman to post one on their five main Test grounds – but it was his first against the old enemy since the Sydney Test of 2011. He had batted 35 times against them since then and never with such freedom. This was also his fastest century against Australia and, given his recent form, perhaps his unlikeliest.

There was an early leading edge that served as a reminder that this was a pitch – another one – that demanded batsmen should play straight. That was what he proceeded to do – but not just in defence. Cook drove smoothly down the ground off the front foot and then imperiously (not an adverb that Cook has often provoked) he stood tall to hit Jackson Bird off the back foot to the sightscreen. In between there were pull and cut shots played with a certainty that has been so elusive in the first three Tests. He even managed to avoid making a fool of himself against Nathan Lyon, who caused him so many problems in Adelaide.

He was dropped once, on 66, by Smith at first slip the ball after Tim Paine had opted to stand up to the stumps against Mitchell Marsh. Otherwise his progress was serene and unusually rapid. He needed seven runs to reach three figures when Smith began the last over of the day, which was not a great one. A full toss and a long hop helped Cook on his way at the end of England’s best day of the series.

Unusually their batsmen were much less troubled than their Australian counterparts. As ever Mark Stoneman was assured against the new ball but he presented Lyon with a tricky catch from his outside edge, which was gratefully snatched in one hand. James Vince exasperated again: there were two of the sweetest cover drives imaginable against Lyon and not many problems against the rest. But he missed his first ball after tea from Josh Hazlewood – or at least he thought he did (there was the suggestion of an inside edge but he opted not to review the lbw decision).

Joe Root started more slowly than usual – not necessarily a bad sign – and bedded in carefully against attack that was hampered by Pat Cummins suffering with stomach problems. It was almost as if Root was seeking to emulate Smith’s restraint. Together England’s senior batsmen added 112 and it all seemed relatively straightforward, which made Australia’s earlier collapse even more of a surprise.

Having reached the heights of 260 for three after half an hour’s play Australia lost seven wickets for 67 runs from the moment Tom Curran ran up to bowl his first ball of the day at Australia’s captain. Until then Smith and Shaun Marsh had settled in without any obvious difficulty against England’s senior citizens.

In bounded Curran, who bowled wider and shorter than intended, a delivery not so dissimilar to the one propelled by Ian Botham at Greg Chappell at Nottingham in 1977 that produced his first Test wicket. Smith, like Chappell all those years ago, scented runs against a rookie and sought to hit the ball square of the wicket. An inside edge sent the balls on to the stumps. Smith was just as stunned and mortified as Chappell at Trent Bridge forty years previously. Whether Curran takes another 382 Test wickets is debatable but it was quite a start for him especially after the false dawn of Boxing Day.

Now the drag-ons kept sending the Australian batsmen back to their dungeon of a dressing room at the MCG. Soon Mitchell Marsh fell in identical fashion to Smith when facing Chris Woakes. Then there was a little flurry of runs as Root persisted with Moeen Ali from the Southern End.

Moeen is a shadow of the bowler of last summer. His confidence is shredded, there has been a slight remodelling of his action to no obvious benefit and he is bowling slower and – crucially – with less zip. He needs to look at some videos of last summer when he was far from the most accurate bowler in the world but his stock deliveries contained some venom. Currently he looks lost and it is not obvious to whom he can turn now that Saqlain Mushtaq has gone.

Tardily Root recalled Broad from the Southern End and something clicked. Upon review Shaun Marsh was lbw on the front foot. The next drag-on took Anderson past Courtney Walsh to number five on the all-time list of Test wicket-takers with 520 – only Glenn McGrath among pacemen is ahead of him now. On this occasion the victim was Paine edging a pull shot on to his pad and thence to the stumps.

On either side of lunch Broad dispensed with Bird and Cummins, whereupon Lyon was given lbw to Anderson. Lyon called for a review and immediately set off for the pavilion anyway. His instincts were correct on a morning when Australia revealed how vulnerable they can be once their phenomenal captain has left the crease.