Before her post-baby comeback, Serena Williams can look to a close friend for advice 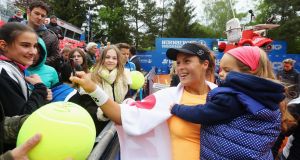 Tatjana Maria of Germany signs autographs with her daughter Charlotte at the Nuernberger Versicherungscup in 2016. Photo: Alex Grimm/Bongarts/Getty Images

If Serena Williams needs any advice on traveling with a baby on the tennis tour, she need not look very far. Tatjana Maria, a friend and fellow resident of Palm Beach Gardens, Florida, is about to embark on a fifth consecutive season crisscrossing the globe with her daughter, Charlotte.

“Serena saw us from the beginning when we were traveling with Charlotte,” Maria said. “But I think she doesn’t need big advice. I think she has a lot of people who help her around.”

Williams unofficially returns to the circuit at an exhibition in Abu Dhabi on Saturday against the reigning French Open champion, Jelena Ostapenko, about four months after giving birth to her daughter, Alexis Olympia.

But Williams, a 23-time Grand Slam singles champion, is unlikely to accumulate as many air miles next season as Maria did in 2017. She competed in 33 singles tournaments, the most of any female player currently ranked in the top 100. Playing doubles at only two tournaments after April reduced her workload, and when the season concluded, her reward was a career-high ranking of 46th.

For the vast majority of the season, Maria was accompanied by Charlotte – who turned four on December 20th – and her husband and coach, Charles. Her year began in Auckland, New Zealand, in early January and ended in Poitiers, France, in late October. It included stops in Bogota, Colombia; Rabat, Morocco; Tashkent, Uzbekistan; and Quebec City.

Maria said that since her comeback in April 2014, Charlotte has been separated from her parents at only three tournaments. One was a lower-tier grass court event in Southsea, England, in June, when Charlotte stayed with her grandparents in France. Maria won the tournament by defeating top-seeded Irina-Camelia Begu.

“The grandparents were happy,” Maria, 30, said with a laugh. “They said, ‘Oh, she can stay with us more.’ Charlotte would like to stay with the grandparents, but for us it’s too long.

“To travel together is the most important thing. At the beginning, I told my husband that if we cannot go all together, I won’t go alone. I didn’t want to leave them behind. So we said right away that we do it together or don’t do it at all.”

A photo album with pictures from their destinations serves as a reminder of their travels. The couple find it difficult to narrow memorable moments on the road to one or two, although Charles Maria chuckled when he reminisced about not being allowed on court for a legal coaching chat in Quebec City a few years ago. He forgot that he was carrying Charlotte.

The Marias said traveling with a young child surpassed life on the road without Charlotte, who they say copes admirably. She sleeps through the night and is used to airports and planes. “We have no stress, never stress, so I think Charlotte felt that, too,” Charles Maria said. “So she was really, really easy.”

There are several mothers in tournament fields these days, including Victoria Azarenka, who continues to be sidelined because of a child custody dispute; Vera Zvonareva; and Kateryna Bondarenko. Mandy Minella, who gave birth in the fall, has indicated she wants to resume her career at some point.

But Tatjana Maria’s workload stands out. “She will never be the kind of player that will play 22 tournaments,” her husband said. “She’ll always play between 28 and 32 or 33. It’s okay. She likes this.

“I have to work hard for this, to be nice and to try to have her take a few weeks off during the year. That’s the plan.” Unlike the partners of many other tour mothers, Charles Maria played professionally, and that has helped the family set out together. “I’m in the tennis world, too,” he said. “We were lucky that I knew this world.”

The couple met in 2012 in Palm Beach after, Tatjana Maria said, she emerged from a “big hole” after the death of her father and coach, Heinrich Malek, from cancer in 2008. In March the same year, she suffered a pulmonary embolism – Williams had the same condition in 2011 – and said doctors told her she was “lucky” to survive. “I went out and played every match for my dad” in 2009, Maria said.

“I didn’t think about anything else. So it took me a lot of power. At the end of the year, I was really tired, so I took a break. When I took the break, I fell in a really big hole and it took me minimum three, four years to really find myself again.

“The first time I found myself again was when I met my husband.” Charles Maria moved to Florida in 2004 to coach a nine-year-old. He bought the couple’s house four years later, a time when house prices dropped significantly because of the economic downturn. There are two guesthouses for extended family and friends, and he built a tennis court, too, an obvious benefit for a tennis player, especially during offseasons and when his wife began to train again after giving birth.

“When she was sleeping, we said, ‘okay, let’s go on the court,’” Charles Maria said. “That was really easy because when you have to go to a tennis club and make a reservation and the baby starts to cry or needs to be fed, it’s a different story.”

During Tatjana Maria’s pregnancy, the pair decided to change her backhand from a two-hander to a one-hander, an unusual and risky switch for a professional.

“Well, it was no risk, no fear at all, because I believed in her,” Charles Maria said. “I still believe in her. I believed in myself, what I could give her.

“So it was not a big deal for me. But for sure you can imagine everyone called me and was telling me I was completely crazy, that she would never be better than 600th in the rankings.”

He expected his wife to play less next year, if only slightly. The plan is for Charlotte to attend school when she is 6, which may limit their globe-trotting.

“You never know what happens, but we were thinking that when she goes to school, I will stop maybe because I want to have a child,” Tatjana Maria said. “Or maybe I will have a second, third or fourth child.” – New York Times service