Novak Djokovic exits US Open to boos after shoulder injury 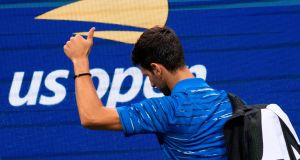 Novak Djokovic of Serbia leaves the court as he concedes the match to Stan Wawrinka. Photograph: Getty Images

Novak Djokovic was cruelly booed off the court at Arthur Ashe Stadium after a sore left shoulder forced his stunning retirement from Sunday night’s fourth-round match with Stan Wawrinka at the US Open.

The top seed and defending champion was trailing 6-4, 7-5, 2-1 after being comprehensively outplayed by the 23rd-seeded Wawrinka when he informed his opponent then chair umpire Nico Helwerth he could no longer continue, prompting a cascade of jeers from the nearly full 23,771-seat arena and leaving the world No 1 to raise a thumbs-up to the gallery as he hauled his equipment bags into the tunnel.

“I’m sorry for the crowd,” said Djokovic, who had won four of the last five major tournaments and 36 of his last 37 grand slam matches. “Obviously they came to see a full match, and just wasn’t to be. I mean, a lot of people didn’t know what’s happening, so you cannot blame them.”

The 16-time major champion, who has made no secret of his goal to overtake Roger Federer (20) and Rafael Nadal (18) atop the all-time leaderboard, had appeared to turn a corner after an uncharacteristically listless opening set when he broke Wawrinka’s serve to open the second. But the dialled-in Swiss, who won 84 per cent of his first-serve points on the night and was not broken again before or after, ruthlessly forced the issue against his under-strength opponent, forcing Djokovic into one unforced error after another by drawing out the same brand of punishing baseline exchanges the world No 1 typically dines on.

Wawrinka broke back in the seventh game of the second and broke again in the 11th, both on misfires by the top-ranked Serbian, then held in the 12th to stake a commanding two-sets-to-none lead. By then Djokovic looked finished.

“For sure I could see some little things that he was in trouble,” said the 34-year-old Wawrinka, a three-time grand slam champion who missed large chunks of two seasons and dropped to No 263 in the world rankings after undergoing a pair of surgeries on his left knee in August 2017. “But I was most likely, most of the time, focused on myself because I know how well he can fight. I know how well he can come back. Doesn’t matter how he’s feeling on the court, and that’s what I was focusing on.”

A shirtless Djokovic sat in his chair before the third set as a trainer fastidiously massaged his shoulder, the crowd buzzing in anticipation of a fightback from a champion who is customarily at his best when flailing out of an emergency. But after making his fifth double fault of the night after three straight forehand errors in the third game to go love-40 down, the three-time US Open winner approached the net for the shocking denouement.

“It’s never the way you want to finish a match,” Wawrinka said. “I am really sorry for Novak, he’s an amazing friend.”

The 32-year-old Djokovic, who had not lost before the quarter-finals at Flushing Meadows since he was a teenager, entered Sunday’s blockbuster nightcap with a 19-5 lead in the head-to-head series between the pair, but Wawrinka had taken three of the most recent seven including their last meeting in the 2016 US Open final.

The first traces of the Serbian’s wounded shoulder had come during Wednesday’s tricky second-round win over Argentina’s Juan Ignacio Londero, but the issue appeared to have passed by Friday when he breezed past Denis Kudla in three elementary sets.

“The pain was constant for weeks now,” Djokovic said. “Some days higher, some days with less intensity and obviously taking different stuff to kill the pain instantly. Sometimes it works, sometimes it doesn’t.”

He added: “It is frustrating. Very frustrating. Obviously not the first, not the last player to get injured and to withdraw from one of the biggest events in sport. But obviously I just came off the court, so of course it hurts.”

Wawrinka advanced to a Tuesday quarter-final with fifth-seeded Daniil Medvedev, who came from behind to see off German qualifier Dominik Koepfer earlier Sunday. “He’s been playing amazing tennis, making final after final, winning Cincinnati, winning here a lot,” he said. “It’s going to be interesting match to play against him. I’m looking forward to it.”

Meanwhile Roger Federer was in imperious form against David Goffin, dropping just four games, winning the last nine on the trot, for a brutal 6-2 6-2 6-0 victory in just an hour and 21 minutes. He will face Grigor Dimitrov, the former world number three, in the last eight.

Women’s world number two Ashleigh Barty suffered a shock fourth round defeat, losing in straight sets to Wang Qiang, the 18th seed from China. Wang will face 23-time grand slam winner Serena Williams in the quarter-finals. The American recovered from losing her opening service game to beat Petra Martic of Croatia 6-3 6-4. Johanna Konta enjoyed one of the biggest wins of her career by beating third seed Karolina Pliskova to also reach the quarter-finals.