Sporting Cathedrals: Wimbledon is the very heartbeat of an English summer

Not afraid to modernise, the All England club always keeps one eye on its long history 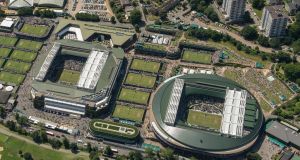 An aerial photograph shows a general view of The All England Lawn Tennis Club on the fourth day of the 2019 Wimbledon Championships. Photograph: Thomas Lovelock/AFP via Getty Images

They say Wimbledon is timeless. Yet, each year as you pass through the gates on Church Road and sweep up past the bronze statue of Fred Perry it has changed from the previous year. It has modernised a court or added a giant screen for fans or put a roof on Centre Court.

It is the largest single annual sports catering operation (3,000 staff) carried out in Europe, yet Wimbledon likes to workout. It always keeps itself trim and it’s not afraid to pay the high end dollar for body enhancement. The plan for the oldest tennis tournament in the world is to hang around for a long time to come.

But for all its modernity it has always clung to its stable rituals and attitudes, husbands them, uses them to sketch a kindly, antiquated image like the Royal Box, the white dress code, the armed forces as stewards, the Ladies’ and Gentlemen’s competitions and the longest partnership in sporting goods history. Slazenger has been the official supplier of tennis balls to The Championships since 1902.

You can find a photograph of Helen Wills Moody winning the first of her eight singles titles at the 1927 championships hitting Slazenger and promoting one of Wimbledon’s favoured tropes of longevity inferring quality.

Andre Agassi’s under shorts, a lava and canary yellow coloured spandex vibe, had them spooked in the 90s. But there is no reason for all the white rules other than English sensibilities and a heightened sense of formality that makes Wimbledon, not just another Grand Slam.

With that the All England club manages something that few sporting venues can. It changes while remaining the same because the adjustments are never brash and the character remains solidly buttoned up English with an international ripple, although nothing too zesty.

It isn’t a mini skirt and jangly earrings type of club and it doesn’t want to be. The crowd are not a hoodie, tracky bottom lot. If you want to ace it in SW19 try Harper’s Bazaar or Hackett.

In the past it was demure, prim and tailored suits for men. But that has changed too. The royal rule-breaker Meghan Markle, who came to watch her pal Serena Williams play against Kaja Juvan last year, arrived wearing skinny jeans and a pinstriped blazer from L’Agence. Vogue magazine told us that.

Sickeningly cool actress Sienna Miller wore a Ralph Lauren number that apparently stole the show on day seven and shattered the myth that only Obama can wear tan suits. Someone even arrived wearing irreverent separates. Don’t ask. Be sure they were not sitting out under an umbrella. But all that is Wimbledon too.

It has always been at the heart of the English summer and endearingly also a long standing metaphor for July rain. It has come to define a fortnight section of the holidays like no other sport. The grounds and character and behaviour every year lift the covers ever so slightly on certain aspects of the proudly self contained English mindset.

The Wimbledon fans are endless droves of good natured, obedient Brits, cheerily violence and aggression free. Each morning when the gates are opened at 10.30am, two honorary stewards with a stretch of plastic chain walk slowly up the south concourse between the courts to the communal areas. A respectful crowd of several hundred slowly walk behind them like mourners, diligently obeying the rules of no running.

When they reach Henman Hill the modus operandi is to fan out with their organised picnics and sunscreen creams, the least restrained of them occasionally breaking into a hurried walk.

But it also remains one of the few major sporting events where you can buy premium tickets on the day of play. A limited number are available daily for Centre Court, Number One court and Number Two court, except for the last four days on Centre Court, when all are sold in advance. In addition, several thousand ground passes are available each day at the turnstiles.

There are rules to queue for ground passes. Of course there are. They advise joining the queue a few hours before the grounds open. On arrival fans are issued with a queue card. The card is dated and numbered to show your position in the queue. It is non-transferable.

At approximately 6am anyone in the queue is woken by the stewards, asked to dismantle overnight equipment and close up into a tighter formation to create space for those joining the queue on the day.

At approximately 7.30am stewards issue wristbands to those towards the front of the queue who are seeking tickets for the show courts. The number of wristbands issued exactly matches the quantity of tickets available for each court on that day.

Wimbledon is a variety of things. But what the fans want – and for which they would gladly break one of the many, many regulations – is to breathe in the air of Centre Court. At its core Wimbledon is selling a magical bag of unequalled prestige and some pretension with Centre Court the illustrious cathedral at its heart, its green paintwork, code #007b22, like the lore it has shaped over the years, never changing.

It was the same shade of green with purple trim when a thundering John McEnroe won his first title there in 1981 and when sprightly Bjorn Borg won his first of five in a row in 1976. Chris Evert, Martina Navratilova, Steffi Graf and Venus Williams all saw the same background hues, the same pristine layout, the discreet sponsors names, the surrounding avenues and lobbies wholly unpolluted with vulgar advertising, all an abiding link in time.

It does, oddly, draw respect and admiration. There is a sense of entering Centre Court and a mood alteration taking place, the applause when the players come out and the instinctive shift to absolute silence when the ball is held up for the first serve. Fans fall into a tightly observed conformity. You can hear the ball on the strings as clearly as the profanities.

But like any devotional experience it can only happen only if you believe in the respectful, muted tones of the venue, its stories and its aura. Built in 1922, it is the oldest main court for a Grand Slam event, predating Roland Garros by six years.

Yes, they ladle it on thick. But the players are tickled by it all. The younger ones giggle and mew. The television buys in too with the BBC as much part of the marketing fabric as the Pimm’s counters that dot the complex. Goddam it Centre Court even survived a second World War II bombing in 1940.

But at its heart Centre Court is a battle field. There is blood on the grass. People have been maimed there. There are ghosts in the rafters. There have been heroic confrontations and lamentable collapses as players soar and tank under its scrutiny.

Last year Novak Djokovic beat eight-time champion Roger Federer to win the singles title, the match lasting four hours and 57 minutes and the longest singles final in the tournament’s history. And there have been bitter defeats. In 1881 William Renshaw defeated John Hartley, 6-0, 6-1, 6-1, in 36 minutes.

Every player draws something different. With Serena it is glitzy and awesome America, with Rafa respect, with Andy Murray hope and bleeding hearts, with Sharapova her impossible icy glamour and with Federer hopeless veneration.

It is a thousand things Wimbledon, other worldly and always clutching tight those class drawn eccentricities that make it as gloriously English as Fortnum & Mason or Branston Pickle.