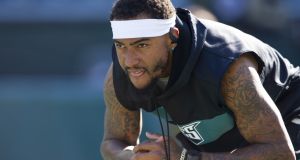 DeSean Jackson announced his intention to visit Auschwitz and to continue to educate himself about the suffering of the Jewish people after recent anti-Semitic social media posts. Photograph: Mitchell Leff/Getty Images

Earlier this month, the Philadelphia Eagles’ DeSean Jackson posted what he believed to be an Adolf Hitler quote on Instagram. It read: “because the white Jews knows [sic] that the Negroes are the real Children of Israel and to keep Americas [sic] secret the Jews will blackmail America. They will extort America, their plan for world domination won’t work if the Negroes know who they were...”

He followed that up by praising Louis Farrakhan, Nation of Islam minister, notorious anti-Semite, and somebody currently warning black people to avoid potential Coronavirus vaccines because Dr Anthony Fauci and Bill Gates are plotting together to depopulate the earth.

Even if the initial quote he used did not actually belong to Hitler, a 33-year-old man proudly promulgating such misguided views is perhaps far less shocking than the toxic fall-out from it. Almost immediately, Stephen Jackson, a former NBA player, close friend of the late George Floyd, and eloquent spokesman for the Black Lives Matter movement, took to social media to laud his namesake (no relation) for “speaking the truth of the facts that he knows”.

When called out on that, Stephen Jackson asked his critics, “Do you know who the Rothschilds are? They control all the banks, they own all the banks.” In a similar vein, Larry Johnson, one-time star NFL running back turned regular anti-Semitic conspiracy theorist, posted a fake quote popular among neo-Nazis about Jews worshipping Lucifer as his chosen people. And Malik Jackson, another Philadelphia Eagle defended his team-mate’s views and described the reprehensible Farrakhan as “honourable”. This is the point we have reached as a civilisation. Spewing the most vile, ancient anti-Jewish tropes has become utterly normalised.

That much was hammered home by the lack of critical response from their peers in the sporting community. A number of Jewish NFL players such as the New England Patriots’ Julian Edelman (who has been called “a kike” by opponents on the field) and the Kansas City Chiefs’ Mitchell Schwartz did speak about the need for DeSean Jackson to educate himself, and Edelman even offered to accompany him to the Holocaust Museum in Washington. The silence from so many, however, has been troubling.

Chris Long, another former Philadelphia Eagle, was one of the few to publicly lambaste Jackson. By his reckoning, players seemed more upset about the league’s decision to ban post-match jersey swapping in the Covid-era than about one of their own promoting naked hatred against the most persecuted religion in history. What is especially disturbing too is that so many of those who found their voice in the recent outbreak of social justice were inexplicably rendered mute again.

“It doesn’t seem like it’s in vogue to call out anti-Semitism,” said Long. “We’re not so keen on that. I don’t know what it is, but it seems like we’re not allowed to say, ‘Hey that’s not good.’”

As the English used to say about football hooliganism, this is a societal problem. Anti-Semitism has been on the rise in America for years. Aside from high-profile incidents such as the attack on the Pittsburgh synagogue that killed 11 people and wounded six back in 2018, scarcely a day goes by when there isn’t a report about a swastika being daubed on Jewish property or a violent assault taking place on a member of the community somewhere in this country.

These are the times we live in. From rapper Ice Cube posting anti-Jewish bile on social media to entire swathes of the internet given over to George Soros’s supposed plans for world domination and, shades of the Black Death here, his nefarious involvement in spreading the virus, it is somehow tolerated as part of the cultural furniture. Witness recurring references to Jewish money and control in the lyrics of various hip-hop artists.

When he realised his career was in potential jeopardy, DeSean Jackson’s reaction to his posting was from page one of the “how to try to defuse a controversy” playbook. He issued a video apology and then posted a photograph of a Zoom chat he had with Edward Mosberg, a 94-year-old Holocaust survivor who wore his Auschwitz uniform for the duration of that conversation. Jackson also announced his intention to visit the concentration camp when he gets a chance and to continue to educate himself about the suffering of the Jewish people.

The Eagles are owned by Jeffrey Lurie and managed by Howie Roseman, both Jews. Eschewing calls to fire or, the most popular suggestion, to suspend the wide receiver, they chose, instead, to fine him an undisclosed amount.

Given that he earns just less than $5 million (€4.4 million) per year in his current contract and has drawn down nearly $80 million (€70 million) since turning pro, the financial penalty was regarded as too trivial by many. But the Eagles were in a bind here. Seven years ago, they chose merely to fine Riley Cooper, a white wide receiver, when video emerged of him dropping the “n” word at a country music concert. Jackson’s punishment could hardly exceed that ridiculously low bar.

“Silence is compliance – that’s a popular sentence today,” wrote Mitch Albom in the Detroit Free Press the other day. “But you can’t be selective with your noise. Not against hate. For all the bigoted garbage stirred up against Jews last week, it was disturbingly quiet out there. We should think twice about why that is.”

And then we can figure it out very quickly.